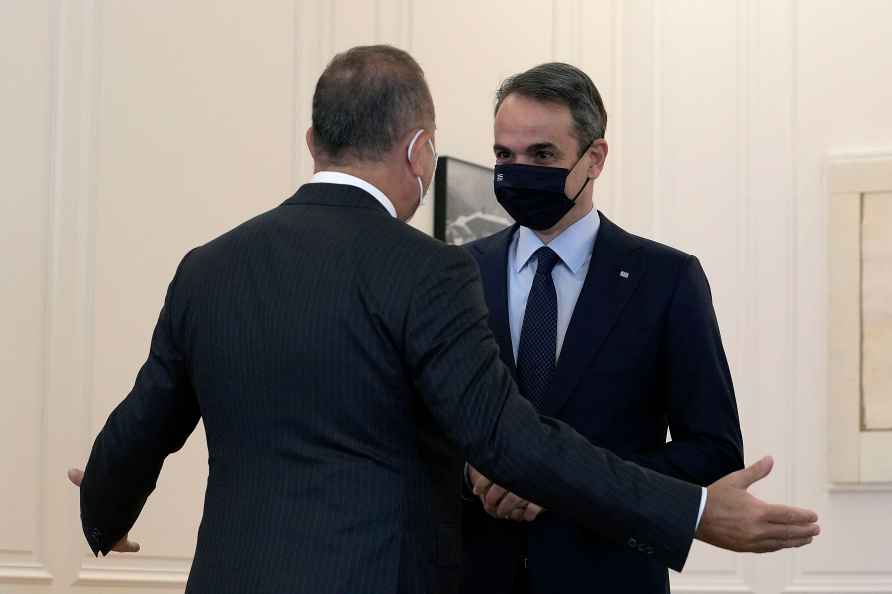 Athens, Sep 28 : Greece will not follow Turkey down the path of "fiery words", says Prime Minister Kyriakos Mitsotakis, while also calling on the neighbouring country to choose "constructive actions and substantial dialogue". "Turkey faces not just Greece, but Europe and our allies in NATO," Mitsotakis said in a statement following a cabinet meeting on Tuesday, accusing Ankara of "repeating lies and threats", reports Xinhua news agency "We will calmly and self-confidently rest in our clear positions with the strength of international law, the vigilance of our armed forces, the support of our allies," he added. Relations between the two NATO allies have long been tense over a series of issues, including maritime and energy disputes in the Aegean and Mediterranean Sea. Lately they have exchanged strong remarks over many incidents. Greek news agency AMNA reported that Turkey on Monday presented a demarche to Athens' Ambassador in Ankara Christodoulos Lazaris over an alleged violation of international law through the presence of Greek armoi=ured military vehicles at border islands. Greece later rejected the claim, AMNA said, citing diplomatic sources. The agency also reported that Greek Defence Minister Nikos Hardalias is visiting several Hellenic Army and Hellenic Navy posts on islands of the Eastern Aegean Sea on Tuesday and Wednesday. "Issues of defence and the strengthening of our deterrent power, as well as issues of national sovereignty, remain non-negotiable," Hardalias said in a statement ahead of the visits. The Prime Minister's remarks came a day after Turkish President Recep Tayyip Erdogan vowed to "use all means" to protect Ankara's rights and interests against Greece. "We will not fail to use all the means to defend our country's rights and interests against Greece, when necessary," Erdogan said at a press conference after a cabinet meeting on Monday. He accused Athens of making policies based on "provocative actions" and suggested that Greece is being "dragged into a swamp with military build-ups". /IANS

[President Joe Biden, center, at the top of a meeting with congressional leaders to discuss legislative priorities for the rest of the year, Tuesday, Nov. 29, 2020, in the Roosevelt Room of the White […]