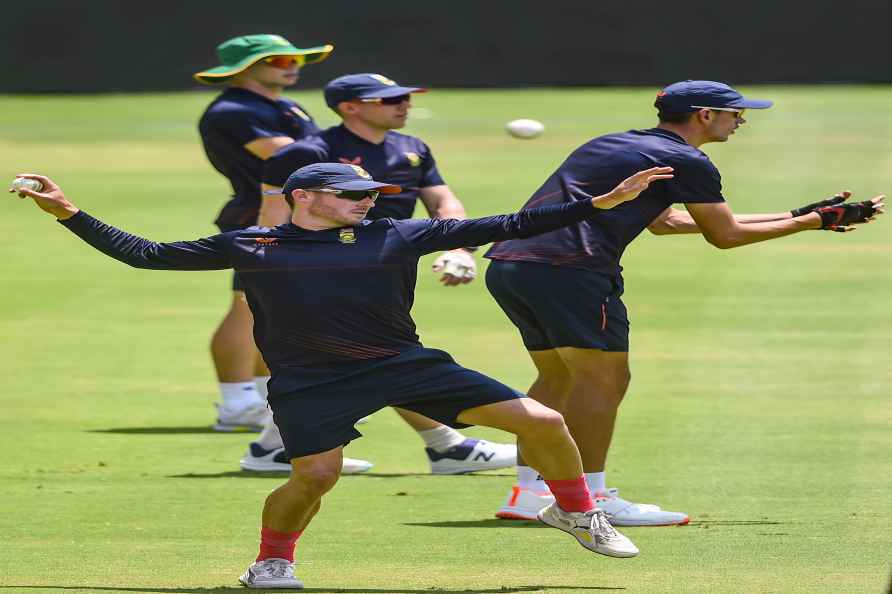 [Thiruvananthapuram: South African players during a practice session ahead of the 1st match of the T20 cricket series between India and South Africa, at Greenfield International Stadium in Thiruvananthapuram, Tuesday, Sept. 27, 2022. ( /PTI] Lahore, Sep 27 : England white-ball skipper Jos Buttler is likely to miss all seven matches in the ongoing T20I series against Pakistan, with head coach Matthew Mott saying he is not willing to take any risk with the injured player just weeks before the ICC T20 World Cup in Australia next month. Buttler is still recovering from a calf injury he picked up while playing domestic cricket in England and the charismatic right-handed batter hasn't played any international cricket since he led the national side against South Africa in a T20I in Southampton in July-end. Buttler, who is accompanying the white-ball side to Pakistan despite the injury and veteran all-rounder Moeen Ali is leading in his absence, was expected to play at least a couple of games in the crucial build-up series before the T20 World Cup, but with coach Mott taking an extremely cautious approach, the star cricketer might well miss all the games in the sub-continent. The series is currently level 2-2. "With regards to Jos, he's still a while off," Mott was quoted as saying in Lahore by ICC. "He's not a player we want to take a risk on at this stage, so close to a (T20) World Cup, and it was a reasonably significant injury that he had. "He's champing at the bit for a game but we'll just try and see how we go. Maybe in the last game or two, he might be a chance." Buttler's availability for the T20 World Cup Down Under will be crucial to England's fortunes, with the charismatic opener finishing last year's event in the UAE as the fourth leading run-scorer. He also emerged as the leading scorer in IPL 2022, smashing four centuries and a mind-boggling 863 runs for Rajasthan Royals. Buttler could still get a few opportunities to tune up his game ahead of the World Cup even if he misses all the seven games in Pakistan as England will play four warm-up games in Australia prior to their opening match of the T20 World Cup. England missed a gilt-edged opportunity to go 3-1 up in the series against Pakistan when they fell to a three-run loss on Sunday, but Mott said his side competing against the best teams in the world was helping them in the preparation for the World Cup. "We couldn't ask for better preparation than games like tonight (Sunday against Pakistan) where it's all on the line with a couple of overs to go and players are under pressure," he said. "To play in high-pressure situations in front of a big crowd that was right into the game (is great). "Yes, we would love to have won, but I think when you head into a World Cup, you want to play against good opposition in tough games and it's been every bit of that," added Mott. /IANS