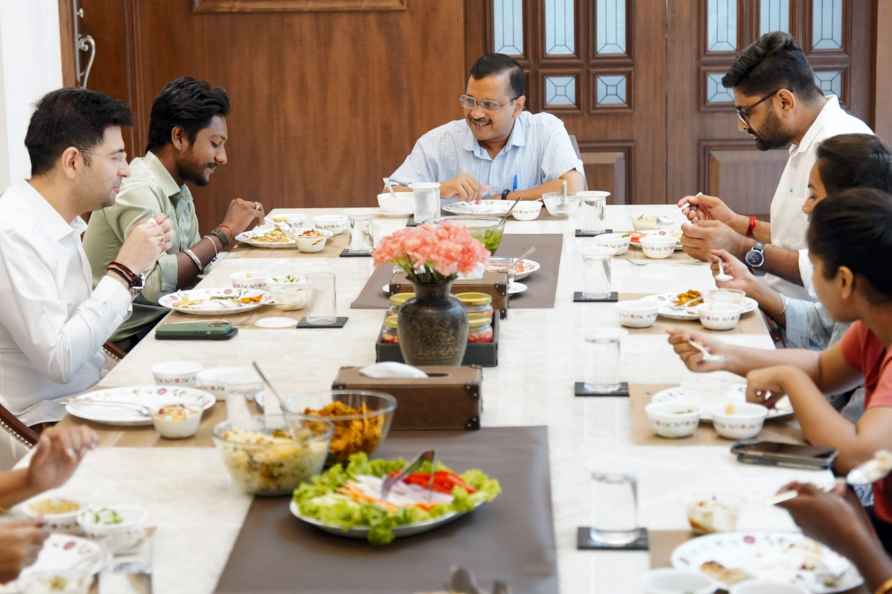 [**EDS: TWITTER IMAGE POSTED BY @AamAadmiParty ON MONDAY, SEPT. 26, 2022** New Delhi: Chief Minister of Delhi Arvind Kejriwal has lunch with sanitation worker Harsh Solanki and his family from Gujarat at his residence in New Delhi. AAP MP Raghav Chadha is also seen. ( /PTI] New Delhi, Sep 26 : Delhi Chief Minister Arvind Kejriwal on Monday welcomed a sanitation worker from Gujarat -- Harsh Solanki and his family members -- to his Delhi residence for lunch. Kejriwal had invited Solanki to Delhi during his townhall with sanitation workers in Gujarat recently. In a meeting with the Dalit community in Ahmedabad on Sunday, Solanki first invited Kejriwal to have dinner at his house. In response, CM Kejriwal had said: "I will definitely come to your home. But before that, I have a suggestion. Will you accept?" When Solanki agreed, Kejriwal said: "I have that seen ahead of elections, all leaders go to the home of Dalits and have food. But to date, no leader has invited a Dalit to his home. So, will you come to my home for a meal?" Aam Aadmi Party (AAP) Gujarat president Gopal Italia accompanied his family to Delhi on Monday. AAP leaders received Solanki at the airport and escorted him to Kejriwal's place for lunch. Raghav Chadha, AAP's Gujarat co-in charge, also received Solanki and his family at the airport. On this occasion, Harsh Solanki gifted him Babasaheb's picture. After having lunch, CM Kejriwal said: "I had the honour of hosting Harsh Solanki and his family, our guests from Gujarat; our families had lunch together at my residence. We don't have time for petty politics, we work for the public, that's why the public likes us. "The people first made our government in Delhi, then in Punjab and now people of Gujarat are saying that AAP's government is going to be formed in Gujarat too." Talking to the media on the recent developments in Rajasthan, Kejriwal said that "we don't know politics but work for the public, build schools and hospitals". "We do politics of work. First, the government was formed in Delhi and then in Punjab. Now, people in Gujarat are saying that AAP government will be formed there too. "They (Congress) are not even able to control their own party, both the parties do manipulations. They keep saying that Kejriwal should stop giving freebies. Today, the hope of the entire country is from the Aam Aadmi Party. I don't understand the alternative, we have to take the country forward," said Kejriwal. /IANS