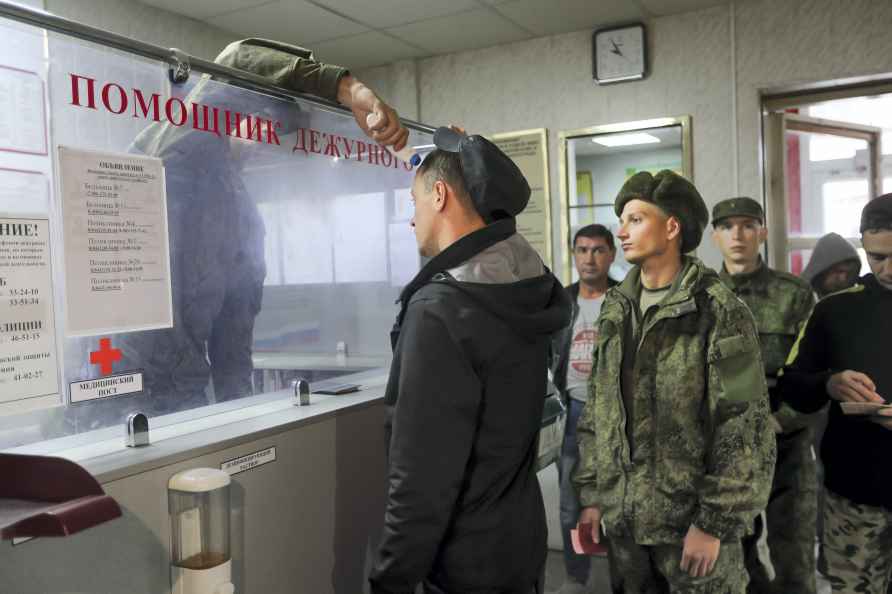 [Volgograd:A Russian officer checks the temperature of recruits as they lineup to be registered at a military recruitment center in Volgograd, Russia, Saturday, Sept. 24, 2022. Russian President Vladimir Putin on Wednesday ordered a partial mobilization of reservists to beef up his forces in Ukraine. /PTI] London, Sep 24 : The EU must not ignore Vladimir Putin's threats that he could use nuclear weapons in the conflict in Ukraine, the bloc's foreign policy chief has said, as per a media report. Josep Borrell told the media that Putin's assertion he was not bluffing had to be taken seriously. His remarks come as Russia begins a partial mobilisation and moves to annex four regions of Ukraine. Putin has faced setbacks on the battlefield, with his forces pushed back by a Ukrainian counter-offensive. "Certainly it's a dangerous moment because the Russian army has been pushed into a corner, and Putin's reaction - threatening using nuclear arms - it's very bad," Borrell said. Seven months since Russia's invasion of Ukraine began, analysts agree that President Putin's forces are on the back foot, but he said a "diplomatic solution" must be reached, one that "preserves the sovereignty and territorial integrity of Ukraine". "Otherwise, we can finish the war, but we will not have peace, and we will have another war," he said, BBC reported. Putin said his country had "various weapons of destruction" and would "use all the means available to us," adding: "I'm not bluffing". At the same time, the President announced the call-up of 300,000 Russians who have done compulsory military service, sparking protests and reports of people fleeing the country to avoid being sent to the front line. Borrell dismissed concerns that the EU's arms supplies were running low, and said it must continue providing military support to Ukraine, as well as applying economic sanctions against President Putin and his allies and conducting diplomatic activity. He admitted that the rising cost of energy prices caused by the conflict was a matter of concern. "People in my country tell me the price of the gas means we cannot continue working, we cannot continue making my business run," the Spanish politician said, adding he had heard similar concerns from leaders from Africa, South America and Southeast Asia. /IANS

Chennai, Dec 1 : The opposition AIADMK has stepped up pressure on the Tamil Nadu government to order a CBI probe into the alleged seizure of 'cocaine' worth Rs 336 crore at Vadalai in Ramanathapuram d […]

Kolkata, Dec 1 : Kolkata Police on Thursday arrested three Bangladeshi nationals for allegedly raping a local woman at a hotel in central Kolkata. The accused have been identified as Mohammad Ru […]

Madrid, Dec 1 : The police in Spain are investigating four more incendiary devices and letter bombs, a day after one exploded at Ukraine's embassy in Madrid, according to a media report. The dev […]