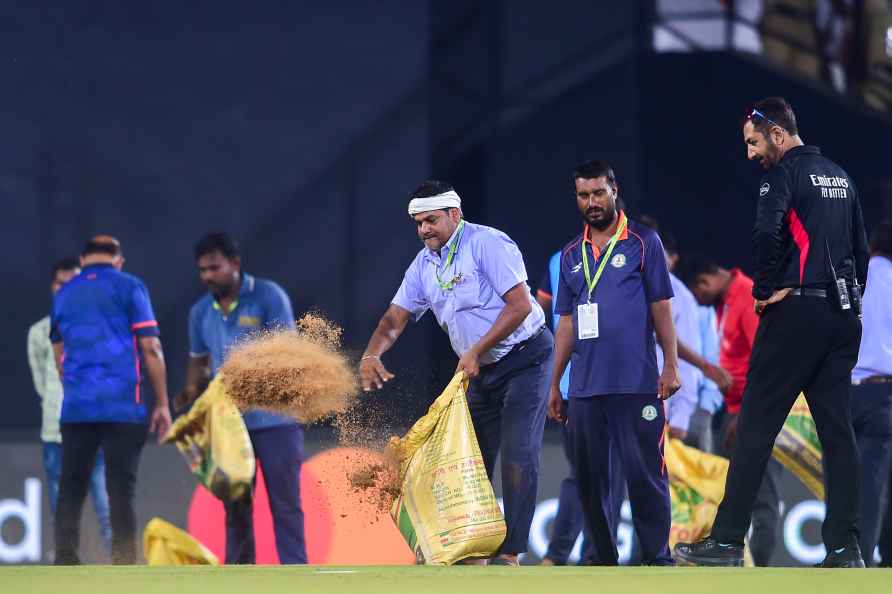 [Nagpur: Groundsmen dry the wet outfield, ahead of the 2nd T20 cricket match between India and Australia, in Nagpur, Friday, Sept. 23, 2022. ( /PTI] Nagpur, Sep 23 : The second T20 International between India and Australia in the 2022 series will start at 9.30 pm at the Vidarbha Cricket Association (VCA) Stadium, Jamtha here, on Friday and will be an 8-over-a-side contest. The umpires finally deemed the outfield fit to play after their third inspection and found the conditions fit to play. "Although the conditions are not perfect, they are safe to play," umpire Nitin Menon reportedly told the broadcaster. The contest was reduced to eight-over-a-side, the toss will take place at 9.15 pm. A bowler can bowl a maximum of two overs and the powerplay will also be of two overs. Though it did not rain the entire day Friday, the start of the match was delayed because of a wet outfield, which had some really bad patches. The umpires deemed those areas too risky for the players. The umpires were most concerned with a wet area near wide min-on which was soft and moving underfoot and not safe for the players. The umpires had a chat with the two captains and informed them of their decision. The players soon came out and started warming up as the ground staff scampered to get the ground ready for the match. The ground staff could finally manage to dry a wet patch near the wide mid-on area to the satisfaction of the umpires who had a brief inspection at 8.45 pm and came back to have a chat with the two captains. The umpires inspected the ground at 7 pm first and then at 8 pm but were not happy with the ground conditions as the outfield was drying at a slower pace than expected. The match was officially set to start at 7 pm. The ground staff has been working on the wet patches near the boundary rope since the afternoon, running the light roller. They have been seen sprinkling sawdust on some of the patches. Orange City has experienced some heavy spells of rain in the last few days. It had rained very heavily on Wednesday night. Though it has not rained since Thursday afternoon, the ground staff could not take out the covers because of overcast conditions. A spell of rain was predicted for Thursday evening, though it did not rain. Though the sun came out at noon on Friday, it was not potent enough to dry the outfield quickly. /IANS