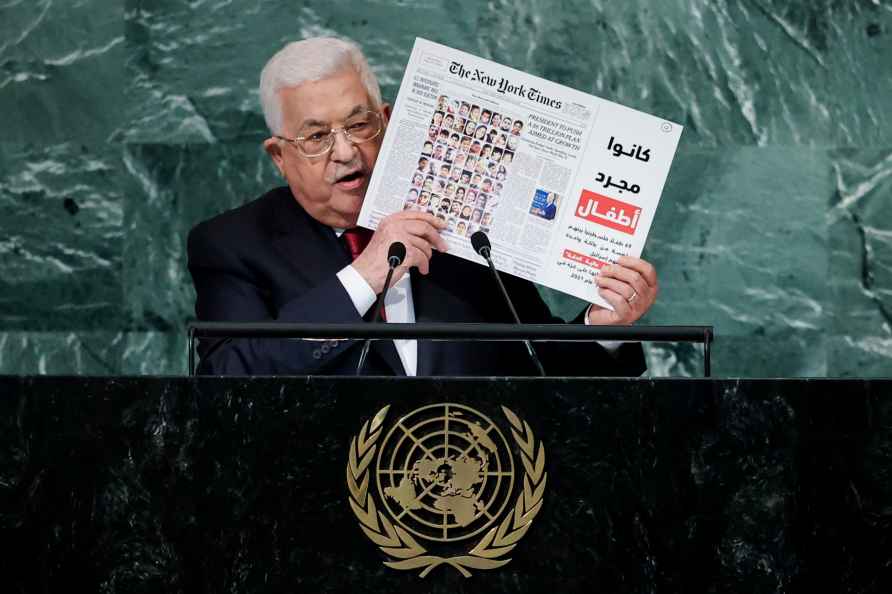 [Palestinian President Mahmoud Abbas holds up a graphic showing the May 28, 2021 front page of The New York Times while addressing the 77th session of the United Nations General Assembly, Friday, Sept. 23, 2022, at the U.N. headquarters. /PTI] New York, Sep 23 : Pakistan Prime Minister Shehbaz Sharif met US President Joe Biden at a reception for world leaders participating in the 77th United Nations General Assembly (UNGA) in New York, media reports said. Shehbaz Sharif, along with other world leaders, were invited to the reception by the US President, Express Tribune reported. This is the first interaction between Biden and the Pakistani Prime Minister. Since his election, Biden had not spoken to either then Prime Minister Imran Khan or his successor, it said. The meeting, despite being informal, is significant given the fact that the Biden administration, during Imran Khan's tenure, largely ignored Pakistan. However, since the change of government, there has been a flurry of engagements between the two countries. Earlier, in his address to the UN General Assembly, Biden made a fervent pitch for extending help to Pakistan where floods had caused huge devastation. In his address, he announced over $2.9 billion in new assistance to address global food insecurity, building on the $6.9 billion in US government assistance to support global food security already committed this year. Earlier this month, a senior adviser of the US Secretary of State visited Pakistan and the Biden administration also approved the $450 million sale of F-16 equipment to Pakistan. /IANS

Chennai, Dec 1 : The opposition AIADMK has stepped up pressure on the Tamil Nadu government to order a CBI probe into the alleged seizure of 'cocaine' worth Rs 336 crore at Vadalai in Ramanathapuram d […]

Kolkata, Dec 1 : Kolkata Police on Thursday arrested three Bangladeshi nationals for allegedly raping a local woman at a hotel in central Kolkata. The accused have been identified as Mohammad Ru […]

Madrid, Dec 1 : The police in Spain are investigating four more incendiary devices and letter bombs, a day after one exploded at Ukraine's embassy in Madrid, according to a media report. The dev […]