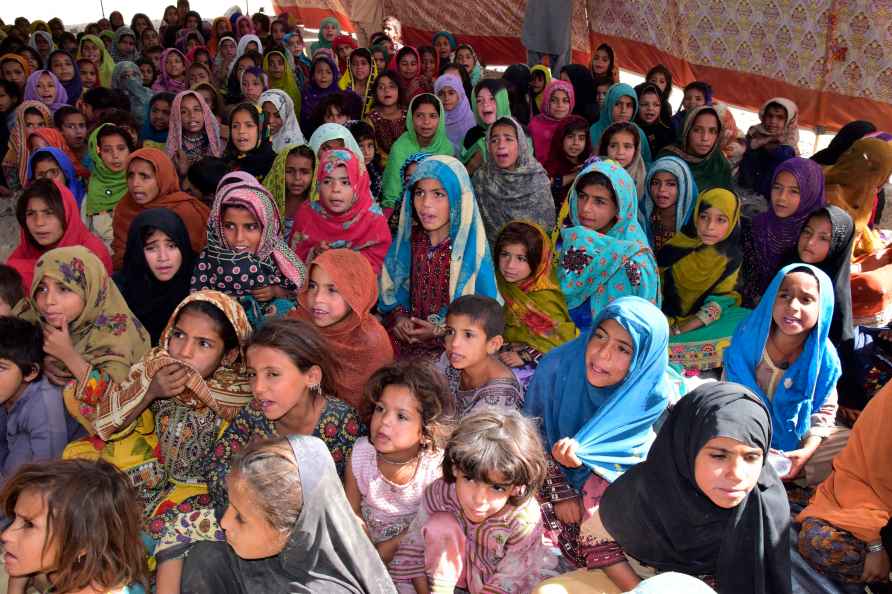 [Victims of heavy flooding from monsoon rains attend class at a relief camp in Dasht near Quetta, Pakistan, Friday, Sept. 16, 2022. The devastating floods affected over 33 million people and displaced over half a million people who are still living in tents and make-shift homes. The water has destroyed 70% of wheat, cotton and other crops in Pakistan. /PTI] New Delhi, Sep 16 : Human-caused climate change likely increased the intense rainfall that flooded swathes of land across Pakistan, according to rapid attribution analysis by an international team of leading climate scientists as part of the World Weather Attribution group. Extreme rainfall in the region has increased 50-75 per cent and some climate models suggest this increase could be entirely due to human-caused climate change, although there are considerable uncertainties in the results. Pakistan received more than three times its usual rainfall in August, making it the wettest August since 1961. The two southern provinces of Sindh and Balochistan experienced their wettest August ever recorded, receiving seven and eight times their usual monthly totals respectively. The Indus river, which runs the length of the country, burst its banks across thousands of square kilometres, while the intense local rainfall also led to urban flash floods, landslides and glacial lake outburst floods. The rains and resulting flooding affected over 33 million people, destroyed 1.7 million homes, and killed more than 1,500 people. To quantify the effect of climate change on the heavy rainfall, scientists analysed weather data and computer simulations to compare the climate as it is today, after about 1.2 degrees Celsius of global warming since the late 1800s, with the climate of the past, following peer-reviewed methods. The researchers focused on two aspects of the event: the 60-day period of heaviest rainfall over the Indus river basin between June and September, and the five-day period of heaviest rainfall in Sindh and Balochistan. The scientists found that modern climate models are not fully able to simulate monsoon rainfall in the Indus river basin, as the region is located at the western edge of the monsoon and its rainfall pattern is extremely variable from year to year. Consequently, they could not quantify the influence of climate change as accurately as has been possible in other studies of extreme weather events, such as heatwaves and heavy rainfall in areas with less variability and more reliable models. For the five-day total rainfall, some models suggest that climate change increased the five-day total rainfall in Sindh and Balochistan by up to 50 per cent. This is in-line with recent IPCC assessments projecting more intense rains in the region and with historical weather records which show that these heavy rainfall episodes have increased 75 per cent in the region in the last few decades. There were large uncertainties in climate modelling of maximum 60-day rainfall in the Indus basin, meaning the scientists were not able to estimate the influence of climate change on this aspect of the rainfall. The analysis also suggests that heavy rainfall like that experienced in Pakistan this year now has approximately a one per cent chance of happening each year, although this estimate also comes with a large range of uncertainty. The same event would probably have been much less likely in a world without human-induced greenhouse gas emissions, meaning climate change likely made the extreme rainfall more probable. While the extreme nature of the rainfall and subsequent floods means that some level of impact was likely unavoidable, many factors contributed to increase the damage, including high poverty rates and political instability. The study was conducted by 26 researchers as part of the World Weather Attribution group, including scientists from universities and meteorological agencies in Denmark, France, Germany, India, the Netherlands, New Zealand, Pakistan, South Africa, the UK and the US. Fahad Saeed, Researcher at the Center for Climate Change and Sustainable Development, Islamabad, said: "Fingerprints of climate change in exacerbating the heatwave earlier this year, and now the flooding, provide conclusive evidence of Pakistan's vulnerability to such extremes. "Being the chair of G77, the country must use this evidence in COP27 to push the world to reduce emissions immediately. "Pakistan must also ask developed countries to take responsibility and provide adaptation plus loss and damage support to the countries and populations bearing the brunt of climate change." Friederike Otto, Senior Lecturer in Climate Science at the Grantham Institute -- Climate Change and the Environment, Imperial College London, said: "Our evidence suggests that climate change played an important role in the event, although our analysis doesn't allow us to quantify how big the role was. "This is because it is a region with very different weather from one year to another, which makes it hard to see long-term changes in observed data and climate models. This means the mathematical uncertainty is large. "However, not all results within the uncertainty range are equally likely. What we saw in Pakistan is exactly what climate projections have been predicting for years. It's also in line with historical records showing that heavy rainfall has dramatically increased in the region since humans started emitting large amounts of greenhouse gases into the atmosphere." /IANS

Kolkata: Flames rise after a fire broke out on the roof of an old...