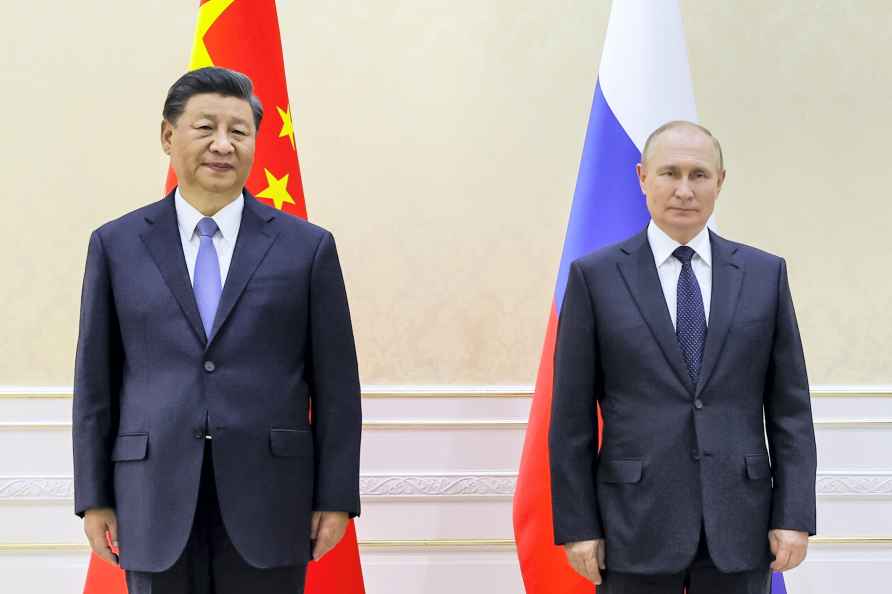 [Samarkand: Chinese President Xi Jinping, left, and Russian President Vladimir Putin pose for a photo on the sidelines of the Shanghai Cooperation Organization (SCO) summit in Samarkand, Uzbekistan, Thursday, Sept. 15, 2022. /PTI] Samarkand, Sep 16 : Gazprom is finalising construction details of the Soyuz Vostok gas pipeline project with its Chinese and Mongolian partners, Russian President Vladimir Putin said at the Shanghai Cooperation Organisation summit, RT reported. He held talks there with Chinese Premier Xi Jinping and Mongolian President Ukhnaagiin Khurelsukh on Thursday. According to the Russian President, Moscow is ready to develop cooperation with Beijing and Ulaanbaatar in the energy sector, including the possibility of increasing cross-border electricity supplies to the two countries, RT reported. "For this year, we predict 20 per cent growth of energy transfers from Russia to your countries, dear friends, of up to 5.2 billion kilowatt," Putin said. Designed to carry natural gas to China through Mongolia, the Soyuz Vostok pipeline is part of the larger 'Power of Siberia 2' pipeline. It will be able to bring up to 50 billion cubic metre of gas to China annually, according to Gazprom. Jinping wants to work with Moscow to take on the responsibilities of "great powers," he told his Russian counterpart on Thursday at the Shanghai Cooperation Organisation summit in Samarkand, RT reported. "China is willing to make efforts with Russia to assume the role of great powers, and play a guiding role to inject stability and positive energy into a world rocked by social turmoil," Xi told Putin during a leaders' summit at the SCO. Putin likewise praised the "multifaceted ties" the two countries have forged, in particular their trade relationship. Highlighting the exchange of $140 billion in trade with Beijing last year, he noted that the volume had increased 25 per cent in the first half of 2022 and said he hoped the figure could reach $200 billion by the end of the year. /IANS