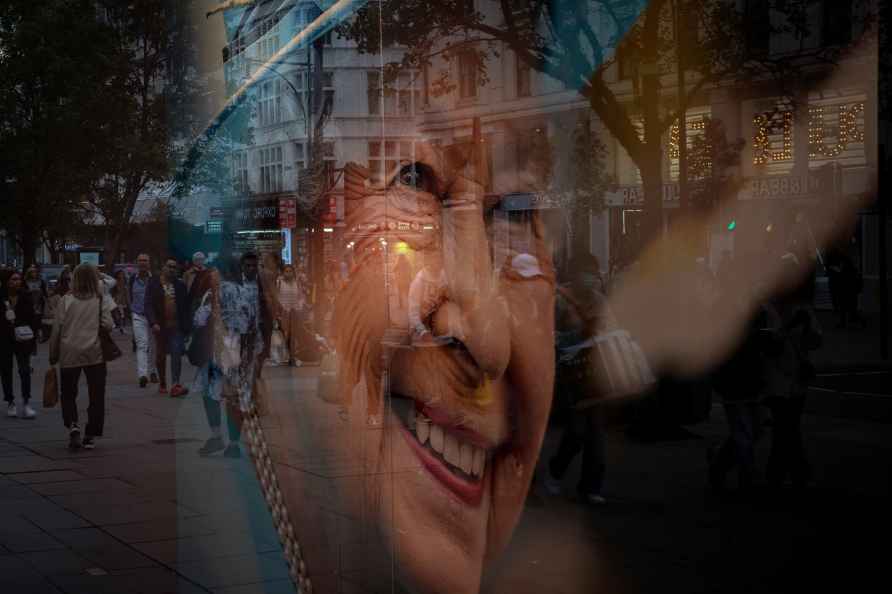 [Pedestrians are seen reflected in the glass of a store displaying a portrait of the late Queen Elizabeth II in London, Thursday, Sept. 15, 2022. The Queen will lie in state in Westminster Hall for four full days before her funeral on Monday Sept. 19. /PTI] London, Sep 15 : The plane carrying Queen Elizabeth II's coffin has broken records to become the most-tracked flight ever, according to an aviation tracker website. The website, Flightradar 24, said that about five million people followed along online as the late Queen was flown from Edinburgh to London on Tuesday, CNN reported. That number is derived from two sources -- 4.79 million people who followed the flight's journey on Flightradar24's website and mobile app, plus an additional 296,000 who tracked the plane on YouTube. That smashes the previous record, achieved just last month during US House Speaker Nancy Pelosi's controversial visit to Taiwan. Her plane's journey to Taipei was tracked by about 2.9 million people, CNN quoted the website as saying. The Royal Air Force plane carrying the Queen spent an hour and 12 minutes in flight. It landed at RAF Northolt, a military station about six miles from Heathrow Airport in London. From Northolt, the Queen's coffin was taken to Buckingham Palace. On Wednesday, the coffin was be escorted to Westminster Hall, Parliament, where the Queen will lie in state until her funeral on September 19 in Westminster Abbey, CNN reported. Before Pelosi's Taiwan visit, the most popular flight search on Flightradar24 was Kremlin critic Alexei Navalny's flight back to Russia, where he was going to be put in prison upon arrival in 2021. /IANS