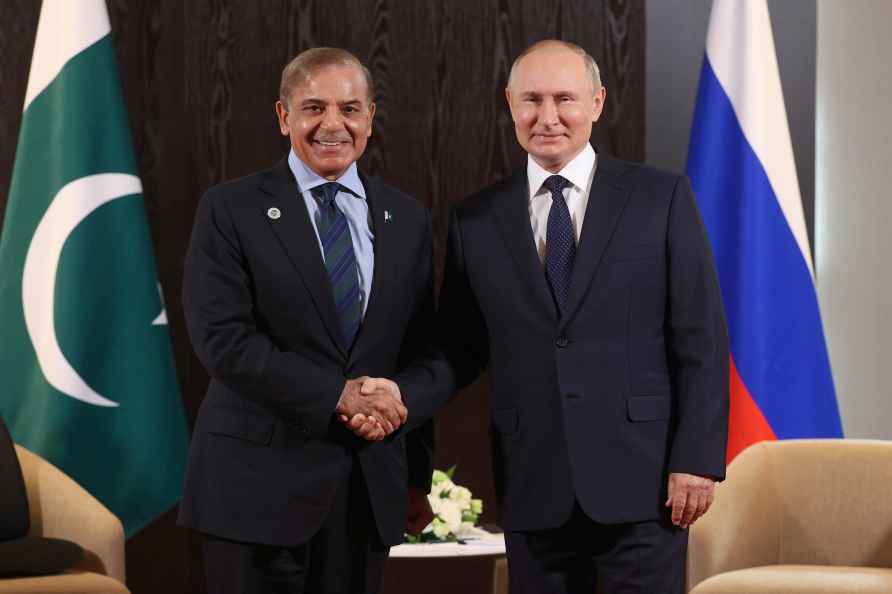 [Russian President Vladimir Putin meets with Pakistani Prime Minister Shahbaz Sharif on the sidelines of the Shanghai Cooperation Organisation (SCO) summit in Samarkand, Uzbekistan, Thursday, Sept. 15, 2022. /PTI] Islamabad, Sep 15 : Russian President Vladimir Putin on Thursday told Pakistan Prime Minister Shehbaz Sharif that the installation of a pipeline for the supply of gas to Pakistan from Moscow is possible, media reports said. The remarks came during a meeting between Sharif and Putin on the sidelines of the Shanghai Cooperation Organisation (SCO) summit in in Samarkand, Uzbekistan, The News reported. During the meeting, matters of mutual interests, bilateral relations between the two countries, and other issues were discussed. Putin also said that a gas pipeline between Pakistan and Russia was part of the already existing infrastructure, The News reported. Earlier on Thursday, Sharif reached Uzbekistan on a two-day visit to attend the annual meeting of the SCO's Council of Heads of State (CHS). The premier is attending the SCO summit scheduled to be held on September 15-16 at the invitation of Uzbekistan President Shavkat Mirziyoyev. The CHS is the highest forum at the SCO, which considers and defines the strategy, prospects and priorities of the organisation. During the meeting, the SCO leaders will deliberate on important global and regional issues, including climate change, food security energy security, and sustainable supply chains. /IANS