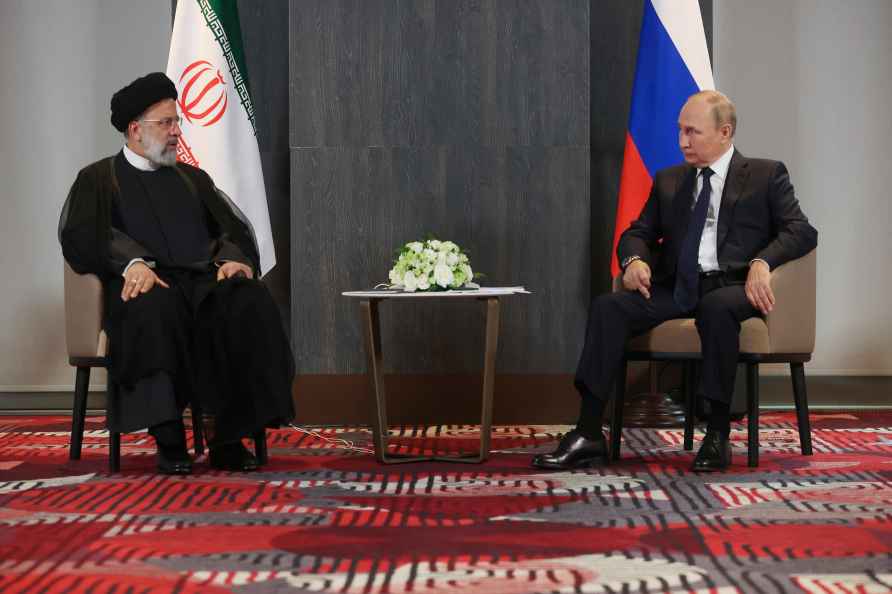 [Russian President Vladimir Putin meets with Iranian President Ebrahim Raisi on the sidelines of the Shanghai Cooperation Organisation (SCO) summit in Samarkand, Uzbekistan, Thursday, Sept. 15, 2022. ( /PTI] Islamabad, Sep 15 : Pakistan Prime Minister Shehbaz Sharif on Thursday arrived in Samarkand, Uzbekistan, to attend the two-day Shanghai Cooperation Organization (SCO) Summit, during which he is scheduled to meet other world leaders in attendance, including Russian President Vladimir Putin. On Thursday, Sharif will separately meet Uzbek President Shavkat Mirziyoyev and Tajikistan President Imomali Rehmon, Dawn news reported. Besides Putin, the Pakistani leader is also scheduled to Turkish President Recep Tayyip Erdogan, Iranian President Ebrahim Raisi, Belarusian President Alexander Lukashenko and Kyrgyz President Sadyr Japarov. However, Foreign Office Spokesman Asim Iftikhar had earlier confirmed that Sharif had no plans to meet his Indian counterpart Narendra Modi. An official said although a brief courtesy meeting between the two was possible, they would not be holding talks as none of the two sides had sought a meeting, reports Dawn news. Prior to his departure, the Pakistani premier took to Twitter to share his views on the SCO summit. "The global economic turbulence has necessitated the need for more cooperation among SCO member countries," he said, adding that the "SCO vision" represented the aspirations of 40 per cent of the world's population. "Pakistan reiterates its commitment to 'Shanghai Spirit'. Mutual respect and trust can be the bedrock of shared development and prosperity," he said. "The SCO has great potential to chart a way forward at a time of deeply worrying transformation in geo-political & geo-economic fields." /IANS

Right wing alleges cops, officials shying away from MP's Freedom of Worship Act
[Casamicciola: : A man removes mud if front of a house after heavy rainfall triggered landslides that collapsed buildings and left as many as 12 peopl