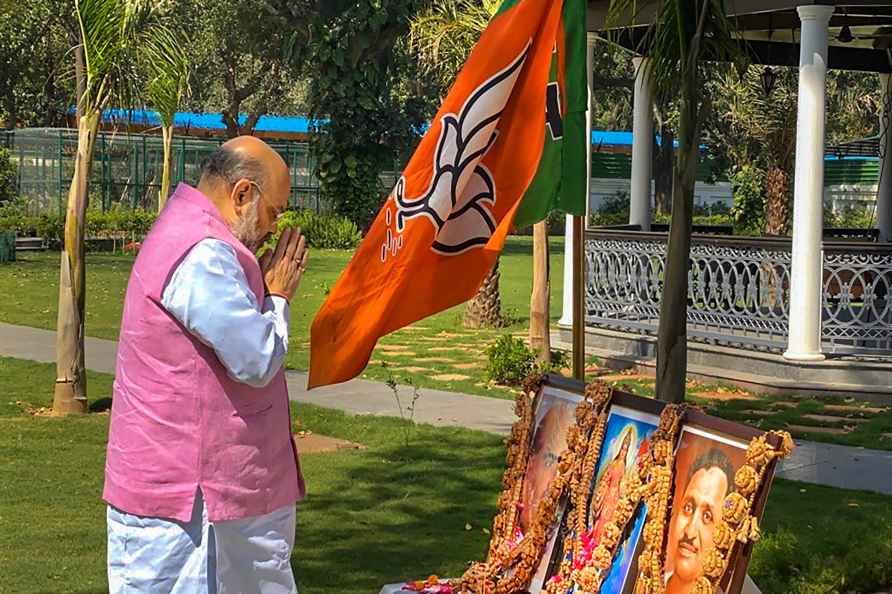 By Archana Sharma Jaipur, Sep 12 : The factionalism in the Rajasthan BJP was exposed once again when party state president Satish Poonia went on a 'padyatra' from Pokaran to Ramdevra all alone as no other senior leader of the BJP joined him. Surprisingly this episode happened a few hours after Union Home Minister Amit Shah departed from Jodhpur on Sunday. Shah was there to inaugurate a border tourism project, and to address the party's national OBC working committee and booth presidents. While veteran leaders said goodbye to Shah after being given a message to stay together, Poonia stunned all by starting this padyatra all alone. He posted on social media: "There will be sunshine in the journey, let's walk. Everyone is in the crowd, if you can go out, then go. Where do paths change for someone? If you can change yourself then come on." Poonia started his journey on foot from Gomat village after visiting Jajwala Mata temple in Pokaran at 2 p.m., travelled 8 kms to reach Ramdevra at 5 p.m. Even after Poonia's social media post, none of the senior party leaders and Union ministers joined him, but on the way, local leaders joined him in the padyatra. Poonia prayed for the prosperity and progress of the country and the state after having darshan of Baba Ramdevra. Those who accompanied Poonia during the padyatra were MLA Pabbaram Vishnoi, former MLA from Pokhran Shaitan Singh Rathod, Chhotu Singh, Mahendra Pratap Puri Maharaj, District President Chandraprakash Sharda, former District President Jugal Kishore Vyas, among others. Poonia shared pictures of his visit at Ramdevra temple and said on his Twitter, "After darshan of Jajwala Mataji in Pokhran along with Sant Shri Pratap Puri Ji Maharaj, reached Runicha Dham and bowed head at Baba Ramdev ji. Prayed for the prosperity of the BJP family and of the state and for disease-free Gaumata." Meanwhile, through his social media post, he tried to give a clear message to the BJP leaders that he is not going to change his ways and programmes on the advice of someone. Whoever wants to walk with him can walk. Earlier on September 6, Poonia, Union Ministers Gajendra Singh Shekhawat and Kailash Chaudhary had planned a padyatra from Pokaran to Ramdevra. According to sources, a complaint was conveyed to the party high command in Delhi by a state leader of the opposition faction that he and several party leaders were not invited to attend the padyatra. Hence this march was cancelled on the directions of party high command. Now after Amit Shah's visit, Poonia did not accompany the party leaders and left for Ramdevra from Pokaran all alone to give a look of a private religious padyatra. Shekhawat and Chaudhary were also not with him. Earlier, Poonia gave a warm send off to Union Home Minister Amit Shah at Jodhpur airport on Sunday morning. During this, State Organisation General Secretary Chandrashekhar, former Chief Minister Vasundhara Raje, Deputy Leader of Opposition Rajendra Rathod, Union Minister Kailash Chaudhary, MP Rajendra Gehlot, P.P. Chaudhary, C.P. Joshi amongst others were present with him. The BJP's Rajasthan team was hosted for a tea party at the residence of Pali MP P.P. Chaudhary in Jodhpur where Vasundhara Raje and Poonia could be seen sitting together. /IANS