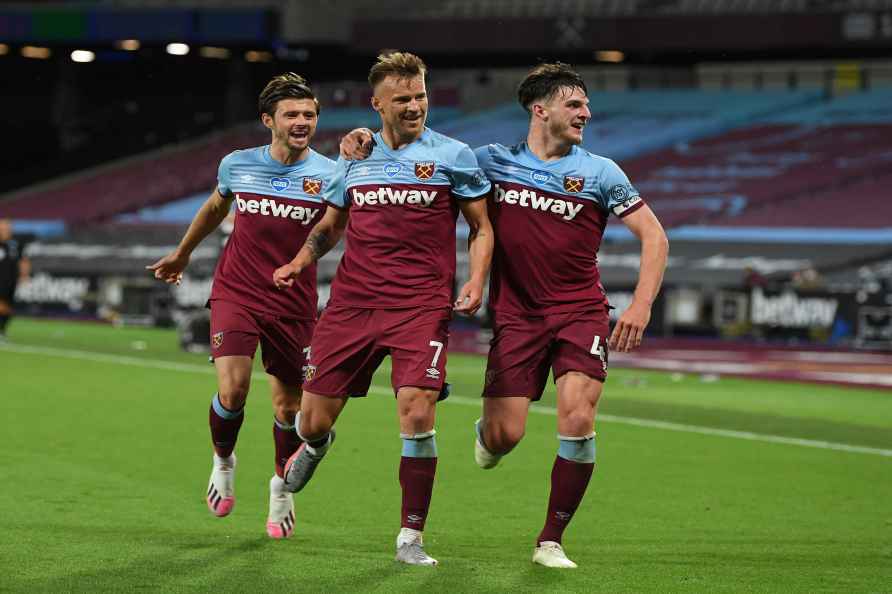 London, Sep 4 : Premier League saw yet another Video Assistant Referee (VAR) drama on Saturday as West Ham United manager labelled the decision to disallow a late goal for his side against Chelsea as 'a ridiculously bad decision' following their 2-1 defeat at Stamford Bridge. West Ham manager David Moyes was left fuming after their late 89th minute equaliser got disallowed by VAR over a suspected foul on Chelsea goalkeeper Edouard Mendy in the lead up to the goal. Moyes labelled the decision as 'ridiculously bad' which eventually led to West Ham's 1-2 loss against Thomas Tuchel's men. "It was a scandalous decision today and I have spoken about it probably three or four times already before I have come to you and I just feel as if there's not much more to say but that it's a scandalous decision. It was never, never, never anything. The goalkeeper spills it and it comes too far off him for him to recover it and I think he fakes an injury, a shoulder injury," he told West Ham's official website. Referee Andy Madley was sent to the monitor by VAR Jarred Gillet at Stockley Park to have another look at Cornet's goal for an apparent soft challenge on Chelsea goalkeeper Mendy by Jarrod Bowen. Madley ruled out the goal after looking at the monitor - much to Moyes' anger and bewilderment. "Jarrod straddles him, like jumps over him, and his trailing foot is there, but the goalkeeper could never get the ball as he's pushed it too far away. The referee made the correct decision so I don't know who did VAR today, but to send the referee to have a look at that I think was a terrible call which put the referee under pressure. And then I thought, well there's no way the referee when he has seen this he will definitely say 'this is fine', but he didn't and he chalked the goal off," he added. "It is a scandalous decision, absolutely rotten from one of the supposedly elite referees," Moyes said. "It doesn't say much about whoever sent him over from VAR as well. It is an unbelievable decision against us. Moyes continued his protests against the decision in his press conference, saying he has "lost faith" in the refereeing in the game and hitting out at Mendy for "faking an injury". "To be fair the goalkeeper for Chelsea tried to do the same for the first goal, tried to say he was fouled for the first goal as well. I just can't see for the life of me how he could chalk the second goal off because I see very little. There's a bit of a coming together, but there's very little. The goalkeeper actually made a goalkeeping mistake to spill it. It should have probably have come into his hands and he should have held it and he didn't hold it and because of that it gave us the opportunity to capitalise on it," he said. "We're maybe not at our fluent best yet, but we're showing sort of what we had last year which was resilience and a bit of toughness and maybe coming away to some of the teams we're going to have to be tough to beat. It's hard to take. We lost here last year in the 93rd minute it's very hard to take. We lost the second goal in the 90th minute today then we also got a goal chalked off just after it, so it's tough to take," he added. /IANS