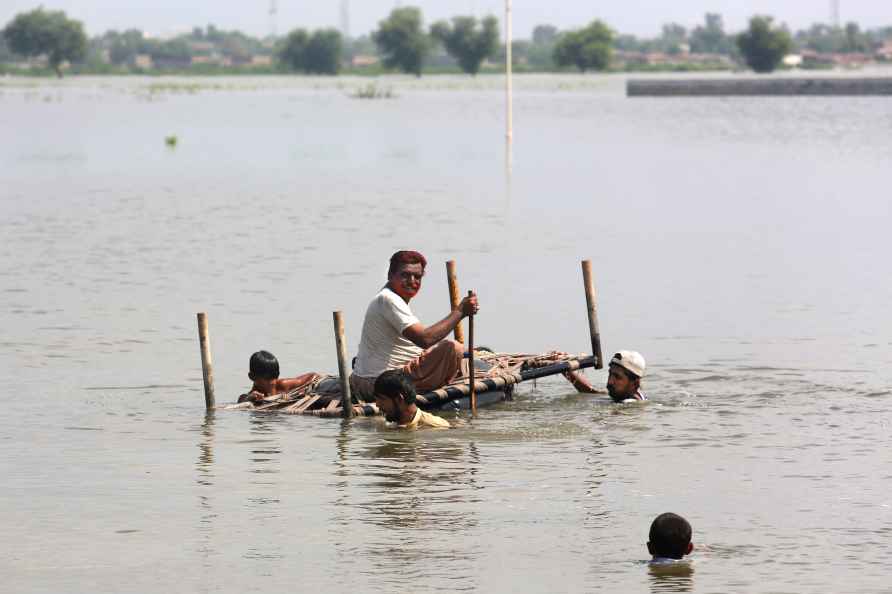 [People use cot to salvage belongings from their nearby flooded home caused by heavy rain in Jaffarabad, a district of Pakistan's southwestern Baluchistan province, Saturday, Sep. 3, 2022. The homeless people affected by monsoon rains triggered devastating floods in Pakistan get enhancing international attention amid growing numbers of fatalities and homeless families across the country as the federal planning minister appealed the international community for immense humanitarian response for 33 million people. /PTI] Islamabad, Sep 3 : Pakistan is currently reeling from the biggest climate tragedy in recent history of the world, Federal Minister for Planning Ahsan Iqbal said here on Saturday. The Minister said this during a press conference following the first meeting of the newly formed National Flood Response and Coordination Centre (NFRCC), Samaa TV reported. This year, monsoon struck areas of the country that usually do not receive much downpour and those areas that usually experience heavy rainfall were spared this season. "Pakistan bore the brunt of 500% more rainfall compared to a 30 year average," the Minister highlighted, adding that it resulted in heavy flooding across the region, Samaa TV reported. "The scale of the latest calamity faced by Pakistan can be matched to the destruction caused by hurricane Katrina in the US that rendered the world's super power helpless in the face of natural disaster." He hoped that the country will face the adversity with courage and overcome it with the help of people. The Minister further pointed out that some regions of Sindh and Balochistan that usually receive less than 40 mm of rain were pounded by around 1,500 mm of downpour resulting in heavy losses. He further said several parts of South Punjab, Khyber Pakhtunkhwa and Gilgit-Baltistan also suffered damage due to torrential rains and resulting floods, Samaa TV reported. Ahsan pointed out that major chunk of damage was incurred by hill torrents and flash floods after rains lashed the region. "Hill torrents swept away at least a million houses and damaged 5,000km of road network," he maintained. The slide presentation shared by the minister illustrated that in total 34 districts in Balochistan spanning over 1.2 million acres were inundated of which Lasbella was the worst hit. As of Saturday, at least 1,265 people have died in the devastating floods that hit the country since mid-June. According to the National Disaster Management Authority (NDMA), 12,577 persons have been injured while some 320,680 houses have been destroyed and 3,766 livestock perished. The NDMA said that 169,676 people have been rescued since the beginning of the crisis, adding that 627,793 people are currently living in the camps. /IANS