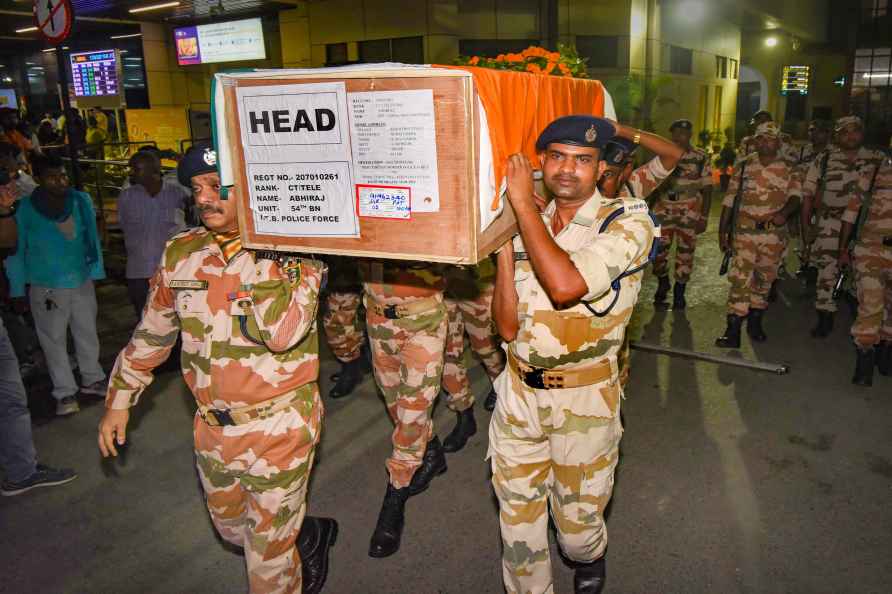 [Patna: Indo Tibetan Border Police (ITBP) personnel carry the mortal remains of colleague Abhiraj who was killed in a bus accident while returning from Amarnath yatra duty on Tuesday, in Patna, Wednesday, Aug. 17, 2022. 7 ITBP personnel were killed in the accident. ( /PTI] Srinagar, Aug 17 : Jammu and Kashmir Lieutenant Governor Manoj Sinha on Wednesday paid tributes to ITBP personnel who lost their lives in a bus accident near Chandanwari in South Kashmir's Anantnag district. Attending the Ceremonial Honours for the ITBP bravehearts at DPL Srinagar, the Lt. Governor said, "The nation will never forget their courage, valour and supreme sacrifice." The mortal remains of the bravehearts were sent to their respective native places for their last rites with full military honours. Seven security men, including six ITBP personnel and a local policeman, were killed when a bus carrying the security personnel rolled down into the river bed in the Chandanwari area of Pahalgam tehsil in Kashmnir's Anantnag district on Tuesday. The bus was carrying 37 ITBP personnel and two local policemen. /IANS