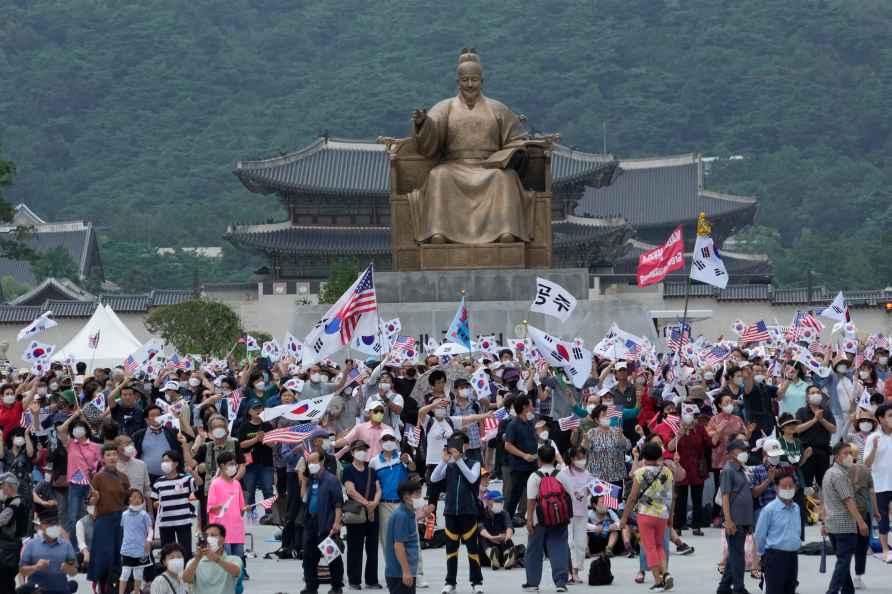 [People stage a rally against North Korea on Korea's Liberation Day in front of the statue of King Sejong in the Joseon Dynasty, in Seoul, South Korea, Monday, Aug. 15, 2022. South Korean President Yoon Suk Yeol on Monday offered "audacious" economic assistance to North Korea if it abandons its nuclear weapons program while avoiding harsh criticism of the North days after it threatened "deadly" retaliation over the COVID-19 outbreak it blames on the South. /PTI] Seoul, Aug 15 : Russian President Vladimir Putin and North Korean leader Kim Jong-un are planning to deepen their diplomatic ties, state media reported on Monday. Putin sent his greetings to Kim as Monday marks the day of Korea's liberation from Japanese colonial rule, writing that the two nations share a tradition of bilateral friendship and cooperation, dpa news agency quoted the state media report as saying. It is in the interest of the people of both countries to expand relations, which would also help "strengthen security and stability on the Korean Peninsula and in the whole Northeast Asian region", Putin was reported as saying. Largely isolated North Korea has pledged its support for Russia since Moscow invaded Ukraine in February, a move that has largely triggered outrage in the West. Pyongyang followed Russia and Syria in recognizing the Donetsk and Luhansk regions as independent republics in July, a step most countries have refused, prompting Ukraine to sever diplomatic relations with North Korea. Russia recognised Donetsk and Luhansk as independent on February 24, the day it invaded Ukraine. According to reports from North Korea, Kim also sent a message of greeting to Putin, saying friendly relations "will become stronger in all areas", based on agreements the two countries reached at their April 2019 summit in Vladivostok, Russia. /IANS

Brussels, Sep 17 : Belgian government has adopted a new package of energy measures to help households and businesses cope with soaring energy prices. Thanks to the new measures, the electricity […]

1 killed, 17 injured in explosion in Pakistan

Islamabad, Sep 17 : One person was killed and 17 others were injured in an explosion in Pakistan's southwest Balochistan province, local media reported. The incident took place on Friday evening […]

United Nations, Sep 17 : UN Secretary-General Antonio Guterres is deeply concerned about the civil unrest in Haiti that has brought the country to a standstill, his spokesman said. "The Secretar […]