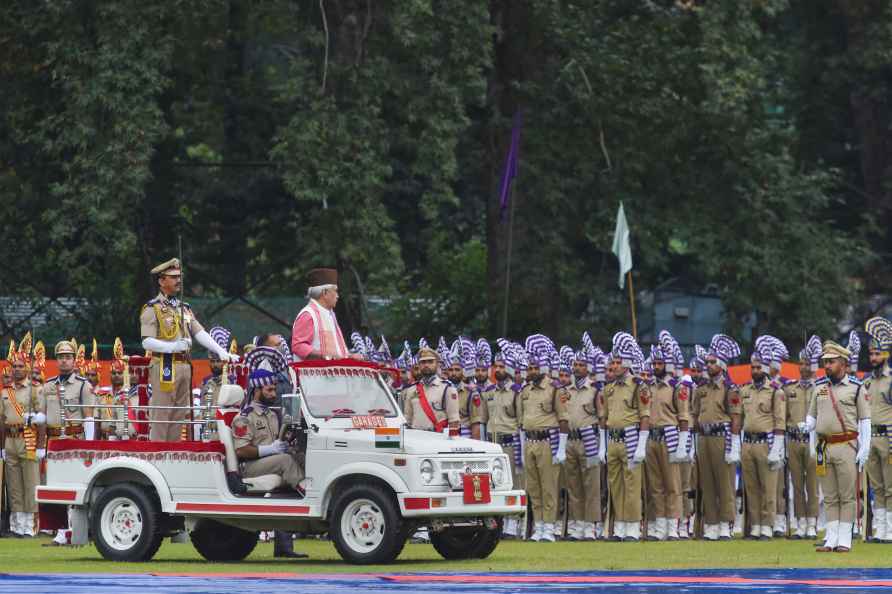 [Srinagar: Jammu and Kashmir Lt Governor Manoj Sinha inspects the parade after unfurling the national flag during 76th Independence Day celebrations at Sher-e- Kashmir Cricket Stadium, in Srinagar, Monday, Aug. 15, 2022. ( /PTI] Srinagar, Aug 15 : Jammu and Kashmir Lt. Governor Manoj Sinha said on Monday that the days of fear, corruption and militancy are over in the union territory. Addressing the main Independence Day function at the Sher-e-Kashmir Cricket stadium in Srinagar, the Lt. Governor unfurled the national flag and took the salute at the march-past. Addressing the function, the L-G said that the days of fear, corruption and militancy are over in J&K. "Nobody will display a Pakistani flag in Kashmir now. Everybody will display the national flag for which the people of J&K have special pride and love," he said. He said, "In this Amrit Kaal Khand, let us all strengthen our resolve to build a fear-free, corruption-free and terrorism-free Jammu and Kashmir, a J&K which our forefathers had dreamt of, where violence has no place, where social and religious harmony form the very core of the society; where women, children, youth, aged, poor, underprivileged have equal rights, live a quality life and are equal partners in India's developmental journey". Smartly turned out contingents of the executive police, J&K armed police, CRPF, SSB, female contingent of police, IRP, Fire & Emergency Services, Forest Protection Force, Pipe & Band contingents, NCC & Student contingents from 14 schools of District Srinagar besides, Civil Defence Department participated in the parade. Artists of the cultural academy and other troupes besides, students performed colourful cultural programmes amid the national patriotic songs and local popular songs which invoked huge applause. Multi-layered security arrangements had been made around the parade venue. All high-rise buildings around the venue had sharpshooters placed atop to prevent separatists from disrupting the celebrations. Sniffer dogs, drones and hi-tech electronic equipment supplemented the multi-layered human surveillance manned by police, paramilitary forces and sleuths of the intelligence wing. Reports of flag hoistings, parades and cultural programmes have also come from all other district headquarters of the UT. So far, no untoward incident has been reported from anywhere except for a mysterious blast in Nar Balakote village of Mendhar tehsil in Poonch district. Officials said a mysterious blast occurred there, but there was no loss of life as one vehicle was partially damaged. The flag hoisting function was not disrupted as the local Sarpanch hoisted the national flag at the local Panchayat building. /IANS

Its necessary to encourage research in the field of architect and decor : Purohit

DW BUREAU / Chandigarh The Governor of Punjab and UT Administrator, Banwari Lal Purohit has emphasized on the role of architect and decor in the field of building construction. The research plays a […]

DW BUREAU / Chandigarh Under the able leadership of Haryana Chief Minister, Sh. Manohar Lal, the State Government is continuously working for ensuring the welfare of the workers. The Chief Mi […]