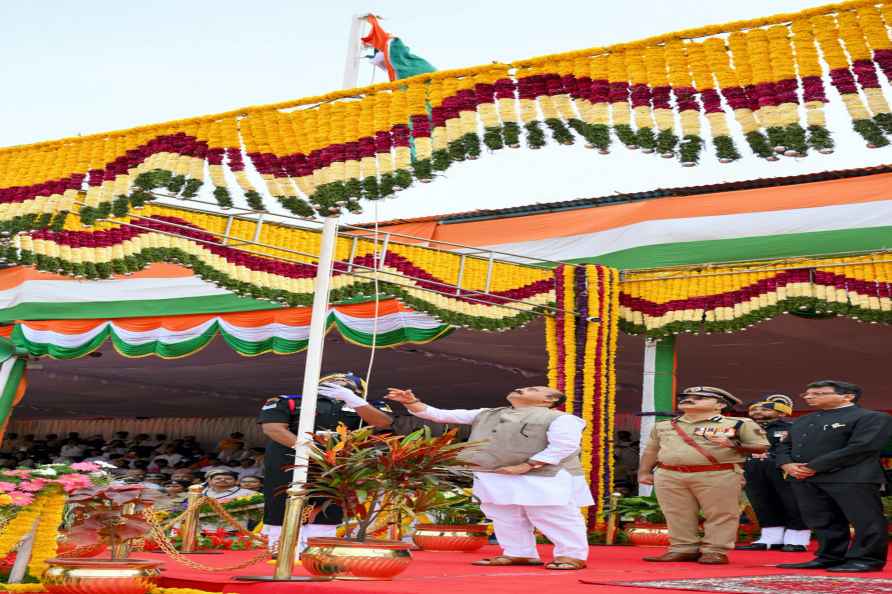 [**EDS: HANDOUT PHOTO MADE AVAILABLE FROM CMO (KARNATAKA) ON MONDAY, AUG. 15, 2022** Bengaluru: Karnataka Chief Minister Basavaraj Bommai hoists the National Flag on the occasion of the 76th Independence Day, at Parade Ground in Bengaluru, Monday, Aug. 15, 2022. ( /PTI] New Delhi, Aug 15 : Alphabet and Google CEO Sundar Pichai on Monday extended wishes to Indians on the occasion of the country's 75th Independence Day with a Google Doodle. The Doodle, illustrated by Kerala-based guest artist Neethi, celebrates India's 75th Independence Day by showcasing the age-old tradition of flying kites. "Happy Independence Day, India! We're commemorating 75 years with a special #GoogleDoodle celebrating family, community and the colourful kites that float in the skies every August 15," the Indian-American CEO wrote on Twitter. "One of our fondest memories,A the age-old tradition of kite-flying, has been integral to the Indian Independence Day festivities," Neethi said in a statement "The artwork (Doodle) depicts the culture around kites- from the craft of creating bright beautiful kites to the cheerful experience of a community coming together." She stated that "soaring kites" is also symbolic of "the great heights we have achieved" as a nation. Neethi noted that "kites are also an outlet for artistic expression- many of them carry trendy motifs or even social messages". "I have drawn kites depicting our national colours, a message of love and commemorating the 75 years of Indian independence. They fly as high as skyscrapers, birds and I'd like to believe the sun!" India officially became a democratic country, ending nearly two hundred years of British rule on August 15, 1947. The lengthy struggle for freedom resulted in the birth of the largest democracy in the world. Heroic freedom fighters, such as Mahatma Gandhi, led the country's independence movement through civil disobedience and non-violent protests. On August 15, 1947, the Indian national flag was raised for the first time at the Red Fort in Delhi. The biggest annual celebration takes place at the Red Fort in Delhi, where the Prime Minister raises the saffron, white and green national flag in synchronisation with a 21-gun salute. After the Prime Minister delivers his televised speech, a patriotic parade honours members of the Indian armed forces and police. People also celebrate by flying kites -- a longstanding symbol of independence. Indian revolutionaries once flew kites with slogans to protest British rule. Since then, recreational and competitive kite flying have become one of Independence Day's most popular traditions. /IANS

New Delhi, Sep 12 : The Coal Ministry will launch e-auction of 10 reserves on September 13 for commercial mining, out of which eight blocks would be put up for auction on Tuesday, while two reserves w […]