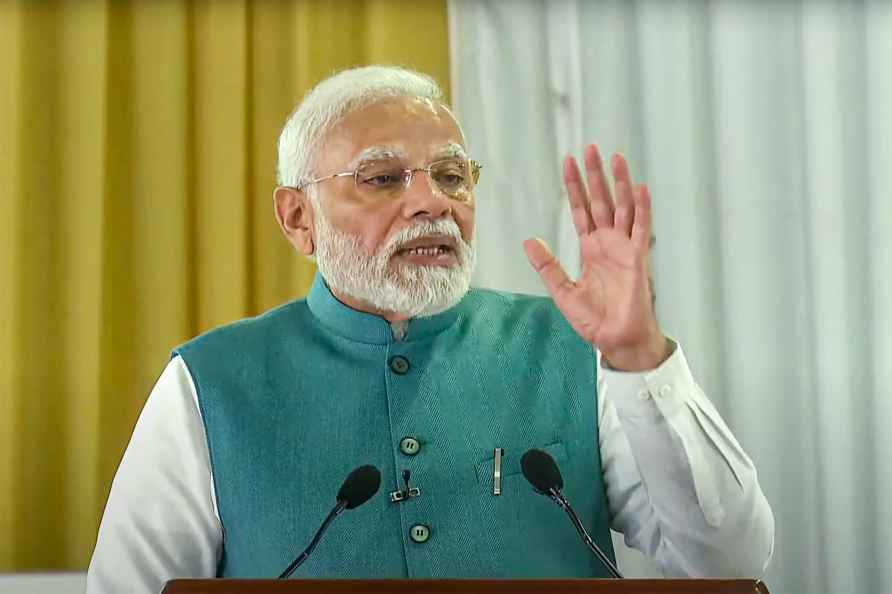 [**EDS: SCREENGRAB FROM A YOUTUBE VIDEO** New Delhi: Prime Minister Narendra Modi during his interaction with the Indian contingent for the Commonwealth Games 2022, in New Delhi, Saturday, Aug. 13, 2022. ( /PTI] New Delhi, Aug 13 : The NRI Festival and Sports Mahotsav being held to celebrate 75 years of Indian Independence and commemorating it in the form of Azadi Ka Amrit Mahotsav celebrations involving the Indian diaspora population, had its trophy for the Sports events unveiled by the Union Minister of Culture, G. Kishen Reddy, as the Ministry's celebrations of Azadi Ka Amrit Mahotsav has already reached a crescendo, with the 'Har Ghar Tiranga' campaign. A first of its kind NRI Sports Mahotsav is being held this year in India where the focus would be to involve as many Overseas Citizens of India to come and participate in these events. Sports in India has always been limited to Indians citizens which in turn does not allow anyone who doesn't hold an Indian citizenship status, to participate in any official tournament, hence the special significance of these events. Prime Minister Narendra Modi in his interactions with the diaspora community has always said that engagement with the Indian community abroad is a priority. Cricket remains the favourite sport of Indians wherever they reside. The Global Power Cricket League, which is being hosted in India as part of the festival celebrations, is ensuring Overseas Citizens of India youth participation from more than eight countries. The idea is to satisfy the aspirations of the Indian diaspora youth living in USA, Canada, UK, Australia, etc to come and have the feel of playing in their Motherland, said Kanthi D. Suresh, Managing Director, Power Sportz TV, who is handling the Sporting activities under the festival. More than 30 diaspora players have already signed up for the event from different countries as they get ready to showcase their cricketing talent in India, perhaps leading to a whole new breed of stars unexplored till date. We are keeping the average age of the playing squad below 25 years said Vishal Yadav, a former Ranji Trophy player, who has been chosen to oversee the Azadi Ka Amrit Mahotsav celebrations. The presence of marquee players in each team will only add to instil a brand value and inspire the new breed of stars. A total of around 120 players are set to enjoy the festival league celebrations, which is scheduled to be held in October. The overall youthfulness of the players will make it different from the other Veterans league which are primarily for players who are over forty plus. Under the Constitution of India and the Citizenship Act of 1955, dual citizenship cannot be granted and to be eligible to play for India, it is mandatory to hold Indian Citizenship. Therefore, these kinds of tournaments being held in India bring a ray of hope to this large diaspora community, crossing over 30 million globally. A population of 30 million together ranks at No. 45 on the world population map, out of the 200-plus countries that exist. The Union Minister for Culture, Kishen Reddy extended his wholehearted support and best wishes for the event. /IANS

Just maintenance, US says to tamp down concern over F-16 spares for Pakistan
[**EDS: HANDOUT PHOTO MADE AVAILABLE FROM IAF PRO ON TUESDAY, SEPT. 13, 2022** Darwin: Security personnel during Exercise Pitch Black 22 hosted by the

Kenya's outgoing Prez pledges peaceful transfer of power
[Kenya's new president William Ruto, seen behind fountain fireworks, holds up a ceremonial sword as he is sworn in to office at a ceremony held at Kas

Guwahati/Agartala, Sep 12 : Two more suspected cadres of the Ansarullah Bangla Team (ABT), an affiliate of the Al Qaeda in the Indian Subcontinent (AQIS) terror group, were arrested in Assam on Monday […]