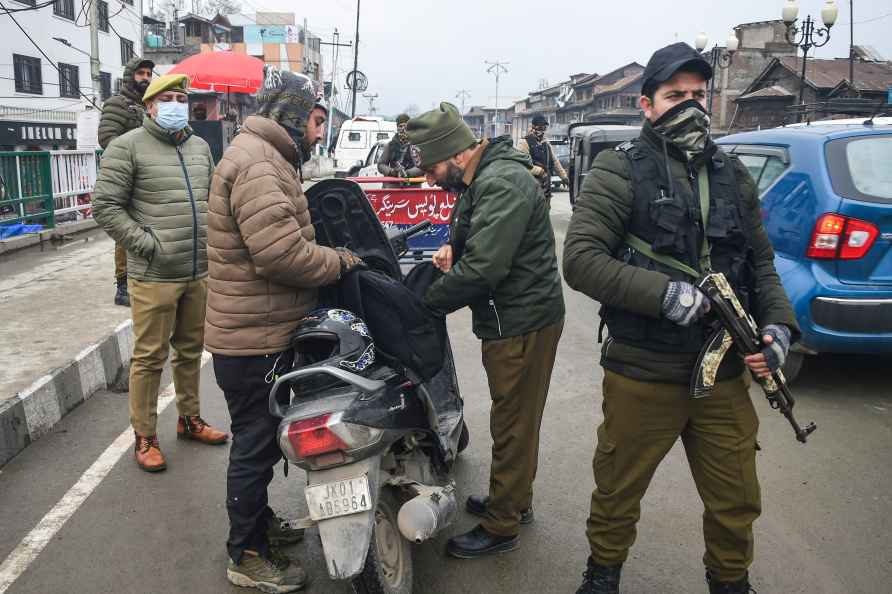 Srinagar, Aug 10 : A major tragedy was averted after police and security forces in a joint operation recovered an Improvised Explosive Device (IED) in South Kashmir's Pulwama district on Wednesday, officials said. Acting on a specific input about the planted IED on the circular road in Pulwama, an operation was started that led to the recovery, the officials said. This road is heavily trafficked, especially in the morning when school buses, office goers and other commuters use it. "An IED weighing approx. 25 to 30 Kgs recovered near Tahab Crossing on Circular road in Pulwama by Police and Security Forces. A major tragedy has been averted by specific input generated by Pulwama Police," Jammu and Kashmir Police quoting Additional Director General Police Kashmir zone Vijay Kumar tweeted. Meanwhile, a case has been registered and police have started the investigation. /IANS

10 IS militants killed in raids in Iraq
Baghdad, Sep 19 : Seven Islamic State (IS) militants and a member of government-backed paramilitary Hashd Shaabi forces were killed on Sunday in a cla

Chennai, Sep 20 : Tamil Nadu IT wing leader of the BJP, C.T. Nirmal Kumar has lodged a complaint with the Lok Sabha speaker, Om Birla, against DMK leader and former union minister A. Raja for the anti […]

9 years of 'The Lunchbox': Nimrat looks back, KJo calls her magical in the film

Mumbai, Sep 20 : As the epistolary-romance film 'The Lunchbox' completes nine years of its release on Tuesday, actress Nimrat Kaur, who played the role of Ila in the film, looked back at the journey a […]

[New Delhi: Family members and relatives of Popular Front of India Delhi unit head Parvez, after National Investigation Agency (NIA) arrested him during a raid by multi-agencies led by NIA for alleged […]