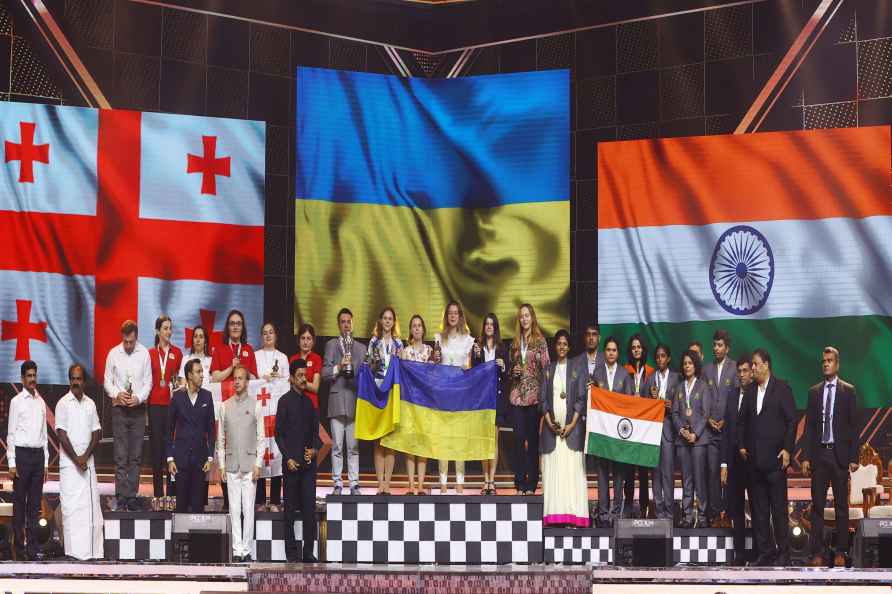 [Chennai: 44th Chess Olympiad Women's Section Bronze medalist India A team with Gold medalist Ukraine's team and Silver medalist Georgia's team during the closing ceremony of the 44th Chess Olympiad, at Mamallapuram near Chennai, Tuesday, Aug. 9, 2022. Tamil Nadu Chief Minister M.K. Stalin, FIDE President Arkady Dvorkovich, FIDE Deputy President & former chess world champion Viswanathan Anand, AICF President Sanjay Kapoor, AICF Secretary Bharat Singh Chauhan and other dignitaries are also seen. ( /PTI] By Venkatachari Jagannathan Mamallapuram, Aug 9 : The 14th-seeded Uzbekistan team won the gold medal while Armenia and India-2 team won the silver and bronze in the Open section of the 44th Chess Olympiad held here, the International Chess Federation (FIDE) said. In the women's section, Ukraine won the gold, Georgia the silver, while the top seed India-1 had to remain content with the bronze. However, the Indian players have a rich haul of board prizes. The 11th seeded India-2 team, composed of young players, won 3-1 against Germany in the 11th and final round with GMs D. Gukesh, and R. Praggnanandhaa splitting the points with their opponents, while GMs Nihal Sarin and Raunak Sadhwani won their games against the German players. In the Open section's final round, Uzbekistan won 2.5-1.5 against The Netherlands while Armenia defeated Spain 2.5-1.5. Second seeded India-1 team drew with the top-seeded US 2-2, with GMs P.Harikrishna and Vidit Santosh Gujrathi drawing their games while GM Arjun Erigaisi defeated much stronger GM Leiner Dominguez Perez in 49 moves but GM S.L. Narayanan lost to Sam Shankland. The India-1 team secured fourth position. In the women's section the top seeded Indian team lost to the US 1-3 and had to settle with a bronze medal. Indian GM Koneru Humpy and WGM R.Vaishali drew their games while Tania Sachdev and Bhakti Kulkarni lost. On the second table, Ukraine defeated Poland 3-1 to win the gold while Georgia defeated Azerbaijan 3-1 to win the silver medal. Be that as it may, in line with their on the board performance, India's young players have a rich haul of board prizes led by Gukesh on the first board in the Open section. On the second board Sarin heads the table while on the third board, Ergaisi and Praggnanandhaa are ranked second and third. In the women's section too, India got a good number of board prizes. Chennai girl Vaishali, Sachdev and Divya Deshmukh are ranked third for the third, fourth and fifth boards, respectively. (Venkatachari Jagannathan can be reached at v.jagannathan@ians.in) /IANS

Ganguly, Shah set for second innings as SC allows amendment to BCCI constitution
New Delhi, Sep 14 : The Supreme Court on Wednesday allowed the Board of Control for Cricket in India's (BCCI) plea in connection with the amendments p