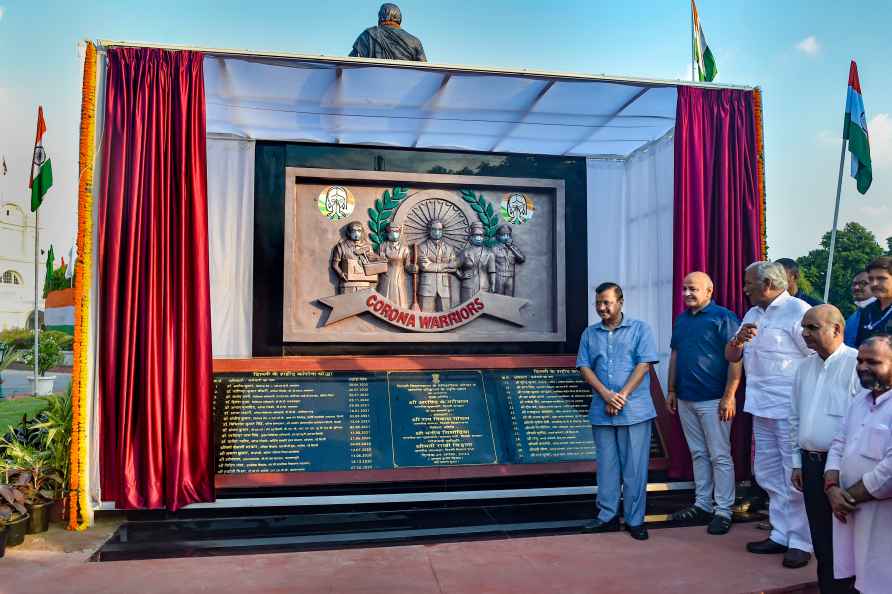 [New Delhi: Chief Minister of Delhi Arvind Kejriwal with Deputy Chief Minister of Delhi Manish Sisodia during the unveiling ceremony of 'Corona Warriors Memorial' in the Delhi Legislative Assembly complex, Tuesday, Aug. 9, 2022. ( /PTI] New Delhi, Aug 9 : Delhi Chief Minister Arvind Kejriwal on Tuesday said that the Covid-19 cases are rising in the city but there is no need to panic as most new cases were mild in nature. "Covid cases are rising in the city. We are keeping a watch on it and whatever steps needed will be taken. But most cases are mild and there is no need for panic," Kejriwal said during a programme ahead of Independence Day. To commemorate the completion of 75 years of Independence, 'Azadi Ka Amrit Mahotsav' is being celebrated all over the country. Chief Minister Kejriwal on Tuesday unfurled the 115-ft high 500th Tri-coloor flag. On AAP's application against PIL in Supreme Court on freebies, Kejriwal said on the sidelines of the event that our only point is that giving free education, free treatment is not a freebie. "This is the job of any responsible government. Waiving off Rs 10,000 crore debts and to waive off the taxes are freebies," he stated. Meanwhile, Delhi Chief Minister also announced that his party had received state party status in Goa from the Election Commission on the basis of performance review in the February assembly polls. Citing an official communication from the poll panel on social media, party convenor Kejriwal said, "After Delhi and Punjab, AAP is now a state recognised party in Goa too." /IANS