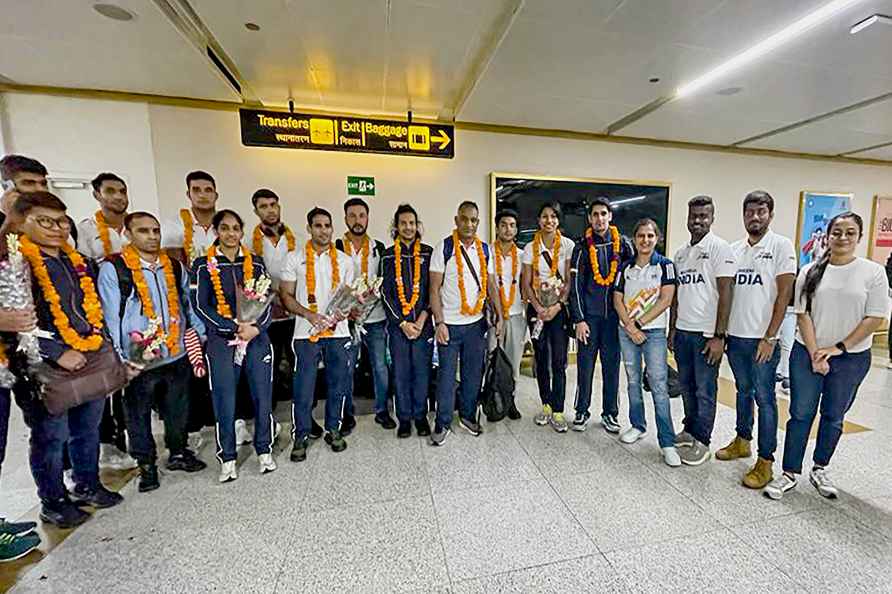 [**EDS: HANDOUT PHOTO MADE AVAILABLE FROM SAI ON TUESDAY, AUG. 9, 2022** New Delhi: India's Commonwealth Games 2022 Boxing contingent being welcomed upon their arrival at Indira Gandhi International Airport, in New Delhi, Tuesday, Aug. 9, 2022. ( /PTI] New Delhi, Aug 9 : Indian athletes, following their scintillating performance at the Birmingham Commonwealth Games, have started returning home from Birmingham to warm receptions, with the ubiquitous dhols, garlands and bouquets giving the IGI airport a festive look. Among those who have arrived since Monday night include the boxing contingent led by Amit Panghal, the athletics and wrestling teams and the para powerlifters, who returned to their Sports Authority of India (SAI) base in Gandhinagar. It was a truly memorable return for Deepak Punia and Sakshi Malik and the entire wrestling contingent when it touched down here, with the celebrated grapplers being mobbed the moment they entered the arrival lounge. "Our Dhakad (braveheart) Wrestlers Are Back. Indian Wrestling contingent is back after a spectacular performance at #CommonwealthGames2022. Let's greet them with our wishes & continue to #Cheer4India. Welcome back Champs!" tweeted the Sports Authority of India, with a video of the players at the airport lounge being garlanded by fans. Led by gold medallist pugilist Amit Panghal, the boxing contingent too arrived in the early hours on Monday to a rousing welcome, with SAI tweeting, "Indian Boxing contingent is back home after a splendid display of grit, power, tenacity & determination at #CommonwealthGames2022. Join us in welcoming them with your wishes & continue to #Cheer4India. Welcome back Champs!" The wrestling, boxing and athletics contingents arrived in India around the time the closing ceremony was taking place in Birmingham. The Indian Olympic Association (IOA) had initially planned to have a top wrestler and a boxer as the flag-bearers during the closing ceremony, but since their events ended early, they boarded the flights back to India. In the event, celebrated India table tennis player Achanta Sharath Kamal and boxer Nikhat Zareen did the honours on the closing day. The hockey, badminton and table tennis contingents are expected to return later on Tuesday. /IANS

Retail inflation rises to 7% in August over high food prices

New Delhi, Sep 12 : India's retail inflation in August 2022 rose to 7 per cent, up from 6.71 per cent in July, mainly due to high food prices, according to data released by the Ministry of Statistics […]