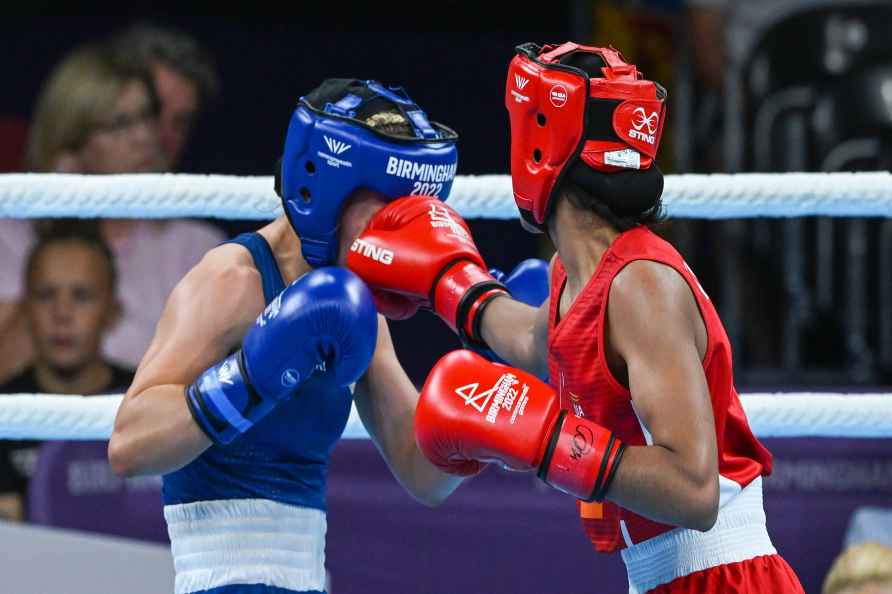 [Birmingham: India's Nitu Ghanghas (red) lands a punch on England's Demie-Jade Resztan in the final match of the women's over 45-48kg (Minimumweight) boxing event, at the Commonwealth Games 2022 (CWG), in Birmingham, UK, Sunday, Aug 7, 2022. ( /PTI] Birmingham, Aug 7 : Indian boxers Nitu Ghanghas, Amit Panghal won gold medals for the country at the 2022 Commonwealth Games on Sunday after winning their respective finals in different categories, here on Sunday. The 21-year-old Nitu beat England's Demie-Jade Resztan 5-0 in the women's over 45kg-48kg (minimumweight) category to clinch gold. This is her first CWG medal and she is also a two-time world youth champion. On the other hand, Amit defeated England's Kiaran MacDonald 5-0 on points in the final of the men's flyweight category, thus winning his first-ever gold medal at the Games. This is his second medal at the Games overall, having won a silver in the previous edition in Gold Coast. The gold is a massive boost for 26-year-old Amit, who had faced a shock opening round loss in the Olympics last year. /IANS

By Hamza Ameer Islamabad, Sep 12 : Former Pakistan Prime Minister and Chairman of Pakistan Tehreek-e-Insaf (PTI), Imran Khan has claimed repeatedly that the reason behind his ouster from power th […]

Retail inflation rises to 7% in August over high food prices

New Delhi, Sep 12 : India's retail inflation in August 2022 rose to 7 per cent, up from 6.71 per cent in July, mainly due to high food prices, according to data released by the Ministry of Statistics […]