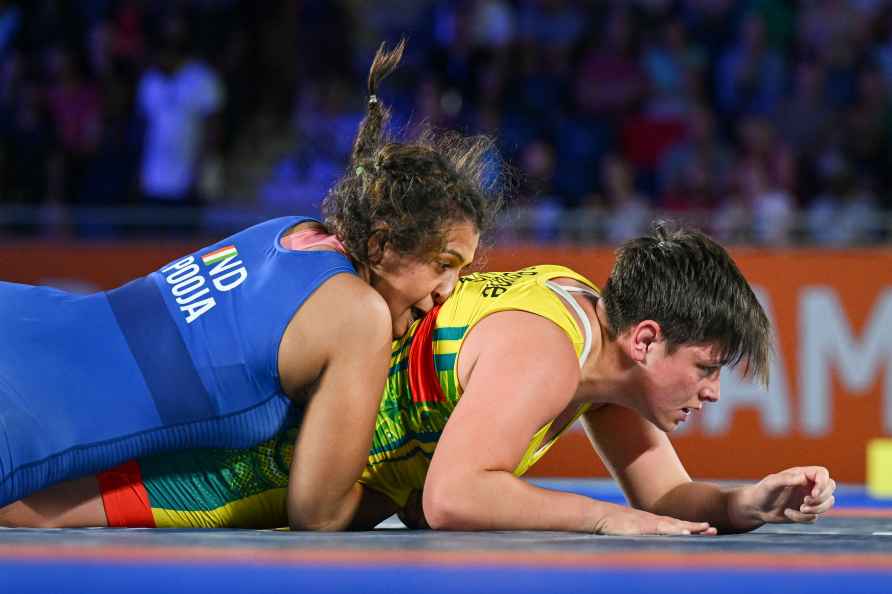 [Birmingham: India's Pooja Sihag competes against Australia's Naomi de Bruine in the Women's Freestyle Wrestling 76kg bronze medal match of the Commonwealth Games (CWG) in Birmingham, UK, Saturday, Aug. 6, 2022. ( /PTI] Birmingham, Aug 7 : India's Pooja Sihag settled for the bronze medal in the women's 76 kg wrestling competition at the 2022 Commonwealth Games, here on Saturday. The 25-year-old from Haryana, a former Asian bronze medallist, beat Australia's Naomi de Bruine in the bronze medal match to make the podium at Birmingham 2022. Pooja won her opening bout at the Coventry Stadium and Arena, beating New Zealand's Michelle Montague by a 5-3 margin in the quarter-finals but Canada's Justina Di Stasio, a 2017 world champion, proved too tough a hurdle for the Indian in the semis. Despite losing the match 0-6, Pooja Sihag made the bronze medal match against Australia's Naomi de Bruine. In the medal bout, Pooja Sihag managed an early two-point takedown and took control of the Aussie on the mat. The Indian wrestler was in a position to pin her opponent but Bruine did well to avoid the instant defeat. Pooja, though, picked up six points from the move and extended her lead to eight just before the break. Pooja stayed defensive after the restart and looked for errors on Bruine's part. It finally came and the Indian finished off the match with a two-point takedown to win the match by technical superiority. /IANS

Global investors view Shehbaz's appeal as sign of imminent default on foreign debt
[Karachi: A Pakistani patient suffering from dengue fever, a mosquito-borne disease, is treated in an isolation ward, at a hospital in Karachi, Pakist

New Delhi, Sep 23 : Microsoft has unveiled a new security feature in Windows 11 that will make it extremely diffficult for hackers to steal user credentials. Called the SMB authentication rate l […]

New York, Sep 23 : A daily serving of walnuts may help in controlling blood pressure, prevent weight gain, and minimise your chance of developing diabetes and heart disease, according to a new study. […]