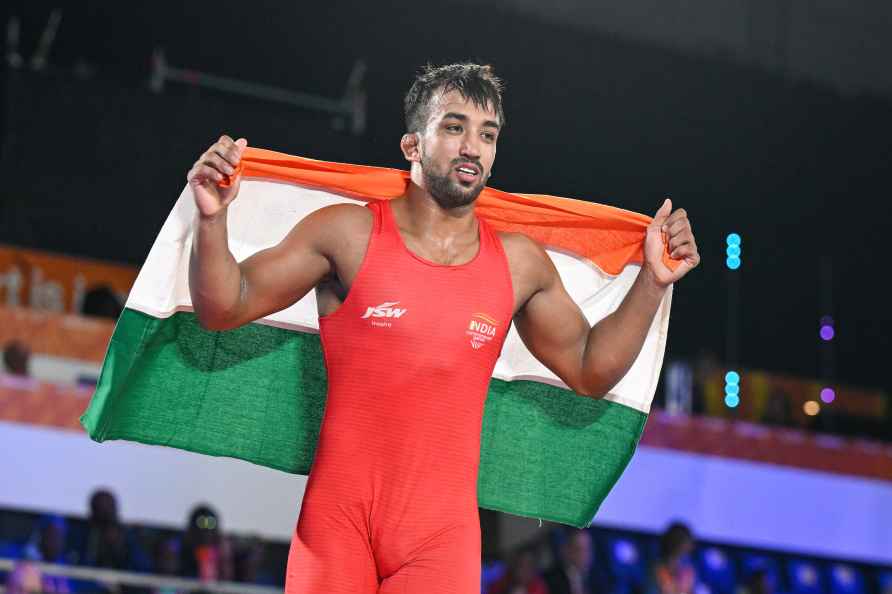 [Birmingham: Gold medallist Naveen Kumar holds the tricolor after winning the final of Men's Freestyle Wrestling 74kg event at the Commonwealth Games (CWG), in Birmingham, UK, Saturday, Aug. 6, 2022. ( /PTI] Birmingham, Aug 6 : Indian wrestler Naveen won the gold medal in the men's 74kg freestyle wrestling at the 2022 Commonwealth Games with an thumping victory over Pakistan's Muhammad Sharif Tahir in the final at the Coventry Stadium and Arena, here on Saturday. Making his CWG debut at Birmingham 2022, the 19-year-old Naveen, an under-23 world champion, won three of his bouts by technical superiority and fell just a point short of making it four in the final. Naveen, who missed the Tokyo Olympics qualifiers after testing positive for COVID-19, started the gold medal match, with purpose. The Indian seemed to have the edge over Tahir in terms of speed and used it to his advantage to open the scoring with a two-point takedown. Shortly after, Naveen almost got his 20-year-old opponent in position for a 'wheelbarrow' but Tahir did well to escape the hold. Leading 2-0 heading into the second period, the match was wide open. However, the Indian grappler soon changed that as he caught hold of Tahir's chest and rolled him three times to go 9-0 up. It was game management from the Indian from there on as he eased through the remaining few minutes to secure his gold. Earlier, Naveen seemed to have the odds stacked against him with four-time African champion Ogbonna Emmanuel John of Nigeria drawn as his first opponent in the qualifying round. But, he broke a little sweat and beat the Nigerian via technical superiority. Singapore's Hong Yeow Lou, in the quarters, suffered a similar fate and so did England's Charlie Bowling, a bronze medallist from Gold Coast 2018, in the semi-finals as the Indian wrestler stormed into the final. Ogbonna Emmanuel John and Canada's Jasmit Singh Phulka won the bronze medals in the division. /IANS

Plane carrying Queen Elizabeth's coffin becomes most tracked flight ever
[Pedestrians are seen reflected in the glass of a store displaying a portrait of the late Queen Elizabeth II in London, Thursday, Sept. 15, 2022. The