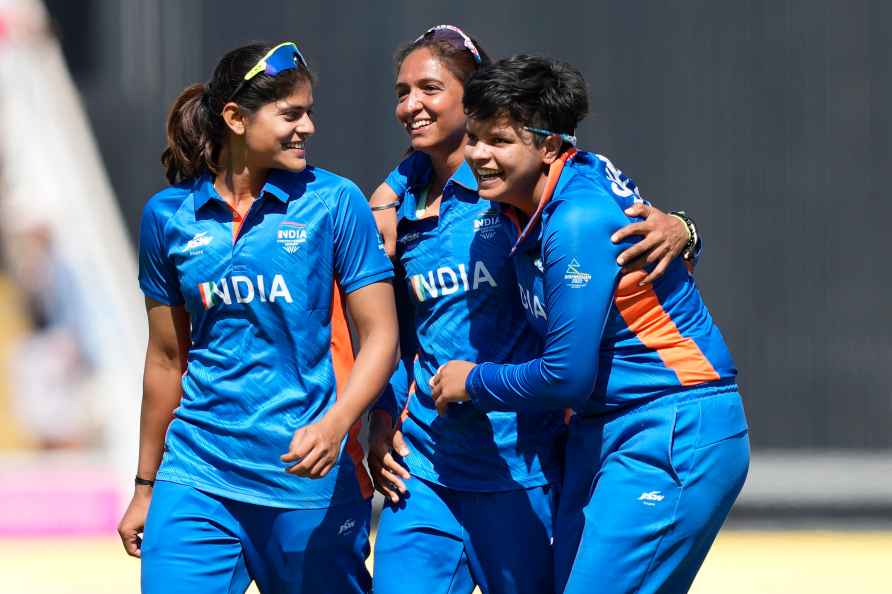 [India's captain Harmanpreet Kaur, center, celebrates with teammates Radha Yadav, left, and Shafali Verma after their win in the women's cricket T20 semifinal match against England at Edgbaston at the Commonwealth Games in Birmingham, England, Saturday, Aug. 6, 2022. ( /PTI] Birmingham, Aug 6 : India shrugged off their jinx of losing to tougher teams and falling short by the smallest of margins when it mattered the most to defeat England by four runs in the first semifinal and enter the gold medal match at 2022 Commonwealth Games. On a fresh turf pitch, there were plenty of twists and turns in 40 overs of pulsating cricketing action. Both India and England were 113-3 in 14 overs, with the hosts needing 48 runs off 30 balls. Amy Jones hit two fours in Shafali Verma's part-time off-spin to take 15 runs off the 16th over. A tight three run over from Deepti Sharma (1-16) brought India back in the match. With 30 runs needed off 18 runs, captain Nat Sciver called for a risky single and Amy was run-out well short of the crease at the non-striker end from Radha Yadav's throw, ending a 54-run stand between the two set batters. Nat, despite not being at her fluent best, hit a six off Pooja Vastrakar and got four leg byes in the 19th over. But on the very next ball, she was caught short of the crease by a flat throw from Smriti Mandhana at deep mid-wicket. Despite having three fielders in the deep as India were slow on over rate, Sneh Rana defended 14 off the final over, including taking out Katherine Brunt, to end with figures of 2-28 and assure India of its first-ever medal from women's T20 cricket at Commonwealth Games. India will now face the winner of the second semi-final between Australia and New Zealand for the gold medal match in the final on Sunday while England will be turning up in the bronze medal match scheduled for the same day. Apart from Sneh and Deepti's tight spells with the ball, which helped India bounce back after a not-so-great start, vice-captain Smriti slammed a blistering 23-ball fifty, the fastest by an Indian woman in the format, while Jemimah Rodrigues applied finishing touches with an unbeaten 44 off 31 balls set up a competitive total of 164-5. Smriti was going after the England bowlers from the word. She was accurate in her footwork, usage of crease, timing and placing the shots very well, all in an elegant manner. Katherine Brunt was hit for three boundaries while Alice Capsey was slammed for a brace of fours. But the most delightful shot off Smriti's bat came through a heave over deep mid-wicket off pacer Issy Wong, an authoritative shot which made a cracking sound. She went to hit Issy for a four over mid-on before bringing out an exquisite slog-sweep and scoop for boundaries against Nat Sciver, as India reached fifty in just 4.3 overs. Smriti greeted left-arm spinner Sophie Ecclestone with a pulled four over backward square leg to reach her fifty in just 23 balls. Shafali Verma then joined the party with back-to-back fours off Sophie as 64 runs came off power-play. But England ended the 76-run opening stand in the eighth over as Shafali was early in her slice and gave a catch to mid-off and in the next over, Smriti walked across to scoop and didn't get the required elevation, giving a simple catch to short fine leg. The duo falling in quick succession meant India got only 15 runs from the 7-10 overs phase. Harmanpreet Kaur, after surviving an lbw appeal off Sophie, upped the ante with two fours and a six. But she holed out to backward square leg for a run-a-ball 20. From there, Jemimah and Deepti joined forces for a 53-run stand off 38 balls. Deepti was dropped on 12 off Katherine, scooped twice off Sophie while Jemimah used her feet well to smack Nat for three boundaries and take 14 runs off the 18th over. Despite losing Deepti and Pooja Vastrakar in the final over, Jemimah got India past 160 by flaying over cover point for four. India didn't have an ideal start to their defence of 165 as Renuka Thakur conceded a four and a no-ball on the first ball. Her second ball was also hit for a four by Sophia Dunkley. She went on to take back-to-back fours off Meghna Singh. But the move to bring Deepti quickly brought reward as Sophia tried to sweep, but was trapped lbw. Danni Wyatt took 14 runs off Meghna's second over, including three fours. Teenage sensation Alice Capsey looked dangerous, but a massive mix-up meant she was run-out by the smallest of margins. Danni hit some more boundaries, including a paddle scoop off Sneh. But on the very next ball, the off-spinner bowled a little wider, forcing Danni to scoop straight to her stumps. From there, Amy and Nat tried to get England over the line. But the squeeze from the Indian spinners, especially Sneh and Deepti, worked well for India on a day where they held their nerves well. Brief Scores: India 164-5 in 20 overs (Smriti Mandhana 61, Jemimah Rodrigues 44 not out; Freya Kemp 2-23, Nat Sciver 1-26) beat England 160-6 in 20 overs (Nat Sciver 41, Danni Wyatt 35; Sneh Rana 2-28, Deepti Sharma 1-16) by four runs /IANS

3rd Test: Patidar's ton puts India A in strong position against New Zealand A
[Bengaluru: India A batter Rajat Patidar raises his bat as he returns to the pavilion after India A declared their second innings, during the third da

A UP village that has no legal sanctity

Muzaffarnagar, Sep 17 : It is a hamlet that has no legal sanctity. Devastated by floods year after year, a major chunk of the population has moved away to another site and Hajipura, situated on […]

New Delhi, Sep 17 : The Congress on Saturday called Prime Minister Narendra Modi's releasing of the eight cheetahs into the wild at a Madhya Pradesh national park as "tamasha" (drama), adding that it […]

Mumbai, Sep 17 : The Reserve Bank of India (RBI) is ready to bring its card-on-file tokenisation norms into effect from October 1 after various complaints were filed regarding the misuse of debit or c […]

SRK to Modi: Your dedication for welfare of our country, its people is highly appreciated

Mumbai, Sep 17 : Bollywood superstar Shah Rukh Khan wished Prime Minister Narendra Modi on his 72nd birthday on Saturday. Shah Rukh took to Twitter to wish the leader and even asked him to take […]