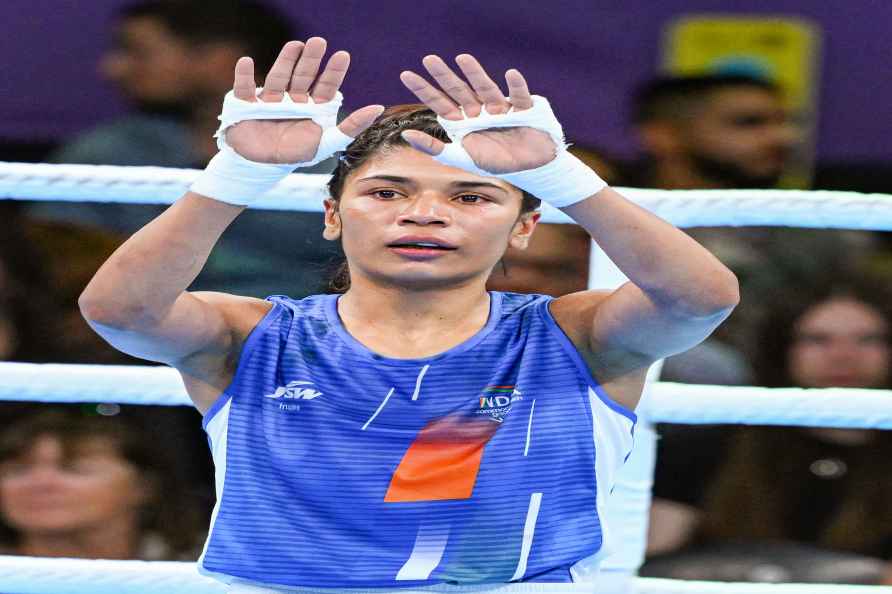 [Birmingham: Nikhat Zareen of India after winning her bout against Stubley S Alfia of England during semifinal match of Women's Lightfly (48-50Kg) boxing match at Commonwealth Games 2022, in Birmingham, UK, Saturday, Aug 6, 2022. ( /PTI] Birmingham, Aug 6 : India are through to the final of 2022 Commonwealth Games women's T20 final after defeating England by four runs in a thrilling semifinal at Edgbaston on Saturday. India will now face either Australia or New Zealand from the second semi-final, to be held later on Saturday, for the gold medal match in the final on Sunday while England now enter the bronze medal match scheduled for the same day. Just like India, England were at 113-3 in 14 overs, needing 48 runs off the last 30 balls. Amy Jones hit two fours in Shafali Verma's part-time off-spin to take 15 runs off the 16th over. A tight three run over from Deepti Sharma brought India back in the match. With 30 runs needed off 18 runs, captain Nat Sciver called for a risky single and Amy Jones was run-out well short of the crease at the non-striker end from Radha Yadav's throw, ending a 54-run stand between the two set batters. Nat, despite not being at her fluent best, hit a six off Pooja Vastrakar and got four leg byes. But on the very next ball, she was caught short of the crease by a flat throw from Smriti Mandhana at deep mid-wicket. Despite having three fielders in the deep as India were slow on over rate, Sneh Rana defended 14 off the final over, including taking out Katherine Brunt, to assure India of its first-ever medal from women's T20 cricket at Commonwealth Games. Earlier, India didn't have an ideal start as Renuka Thakur conceded a four and a no-ball on the first ball of England's chase. Her second ball was also hit for a four by Sophia Dunkley. She went on to take back-to-back fours off Meghna Singh. But the move to bring Deepti quickly brought reward as Sophia tried to sweep, but was trapped lbw. Danni Wyatt took 14 runs off Meghna's second over, including three fours. Teenage sensation Alice Capsey looked dangerous, but a massive mix-up meant she was run-out by the smallest of margins. Danni hit some more boundaries, including a paddle scoop off Sneh. But on the very next ball, the off-spinner bowled a little wider, forcing Danni to scoop straight to her stumps. From there, Amy and Nat tried to get England over the line. But the squeeze from the Indian spinners, especially Sneh and Deepti, worked well for India on a day where they held their nerves well. Brief Scores: India 164-5 in 20 overs (Smriti Mandhana 61, Jemimah Rodrigues 44 not out; Freya Kemp 2-23, Nat Sciver 1-26) beat England 160-6 in 20 overs (Nat Sciver 41, Danni Wyatt 35; Sneh Rana 2-28, Deepti Sharma 1-16) by four runs /IANS

Bhubaneswar: Devotees carrying an idol of goddess Durga move past the Lord Lingaraj temple during an immersion procession marking the end of Durga Puja festival, in Bhubaneswar, Thursday, Oct. 6, 2022 […]

There won't be any impact: K'taka CM on Sonia joining Bharat Jodo Yatra

Jaipur, Oct 5 : India Capitals were crowned the champions of the Legends League Cricket (LLC), which was being held in India for the first time. In an entertaining final, played at the Sawai Man […]