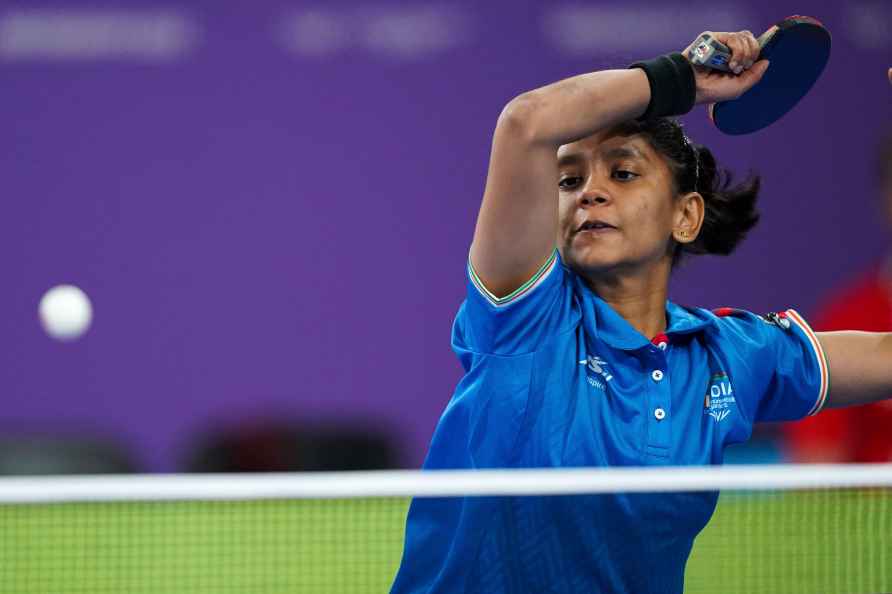 [India's Sreeja Akula in action during England vs India in the mixed doubles quarterfinal during the Commonwealth Games at The NEC, Birmingham, England, Friday Aug. 5, 2022. ( /PTI] By B Shrikant Birmingham, Aug 6 : Olympic bronze medallists Bajrang Punia and Sakshi Malik came up with authoritative wins and upcoming star Deepak Punia added a third gold to the country's Commonwealth Games tally as India asserted its supremacy on the wrestling mat to win six medals at the Victoria Park Arena at Coventry on Friday. Anshu Malik lost in the final while Mohit Grewal and Divya Kakran bagged a bronze each as India came off the wrestling mat on Friday with three gold, one silver and two bronze medals. This took India's tally to 9 gold, 8 silver and 9 bronze medals for a total of 26 medals so far in Birmingham. In lawn bowls, the Indian Men's Fours set themselves to emulate their woman counterparts as they reached the final, beating England 13-12 in the semifinal and set up themselves for a summit clash. The men's pair team also maintained its chances of winning a medal as it reached the semifinals, beating Canada 14-10 in a quarterfinal encounter at the Royal Leamington Spa on Friday. In badminton, top stars PV Sindhu, K Srikanth and Lakshya Sen advanced to the quarterfinals, beating their opponents easily. The focus on the day was on the wrestling arena as six Indians were in action and all were expected to win medals. The day at the Victoria Arena in Coventry started on a bizarre note when the organisers were forced to empty the hall so as to fix some issues with the big screen which they feared would fall down and injure spectators. For the Indians, however, the day ended on expected note even though the wrestlers could not make it six gold out of six disciplines. But three gold, 1 silver and two bronze medals was good for the opening day though they need to claim a few more medals on Saturday to make up for the loss caused by the absence of shooting. Former Asian and Commonwealth Games winner Bajrang Punia established his superiority in the men's freestyle 65kg division, winning the gold medal at Birmingham 2022 by beating Lachlan McNeil of Canada 9-2 in the final on Friday. Tokyo Olympic bronze medallist Punia, who won gold medal four years ago in Gold Coast, came out with aggressive intentions and did not allow his young Canadian opponent many chances, forcing two takedowns in the first period itself to go 4-0 up. The Canadian was a bit too defensive in the first period but launched a good attack at the start of the second period to reduce the margin to 2-4. But Punia, a World No 1 in his division, was up to the task and effected two one-leg takedowns to widen the margin again. He got another point when he pushed his opponent out of the bout area with another one-leg hold. Rio Olympics bronze medallist Sakshi Malik turned back the clock to register a dominant victory and claim her maiden gold medal in the Commonwealth Games, beating Canada's Ana Godinez Gonzalez by fall in the Commonwealth Games here on Friday. Sakshi, who seemed to have gone off the boil after her success in the Rio Olympics, missing some events and got upstages by younger opponents, made a brilliant comeback both in her bout on Friday and her career as she stamped her authority. She came back from a 0-4 deficit, Sakshi came back superbly to pin her opponent with a brilliant double-leg attack to win the match by fall. However, there was some disappointment stored in the wrestling arena as young Anshu Malik lost to a seasoned and experienced opponent and had to be satisfied with silver while Mohit Grewal ran into the world champion in his category but did well to come back and win the bronze medal. All in all the wrestlers set the day up for another fruitful day at the Coventry arena on Saturday as India goes into the hunt for medals in real earnest. /IANS

Ireland men's to play England in four-day Test match at Lord's next year
[Indian fashion designer Neha Poorswani show a creation for 'Runway Reinveted', part of the 'We Are Made in Italy' collecting fashion event are shown

Prayagraj: Muslim devotees participate in the 72-Taboot procession, depicting the martyrdom of Imam Hussain and his followers, in Prayagraj, Wednesday, Sept. 21, 2022. ( /PTI […]

Mumbai, Sep 20 : In a shocker for Union MSME Minister Narayan Rane, the Bombay High Court ordered the BrihanMumbai Municipal Corporation to demolish '300 per cent illegal portions' in a bungalow belon […]