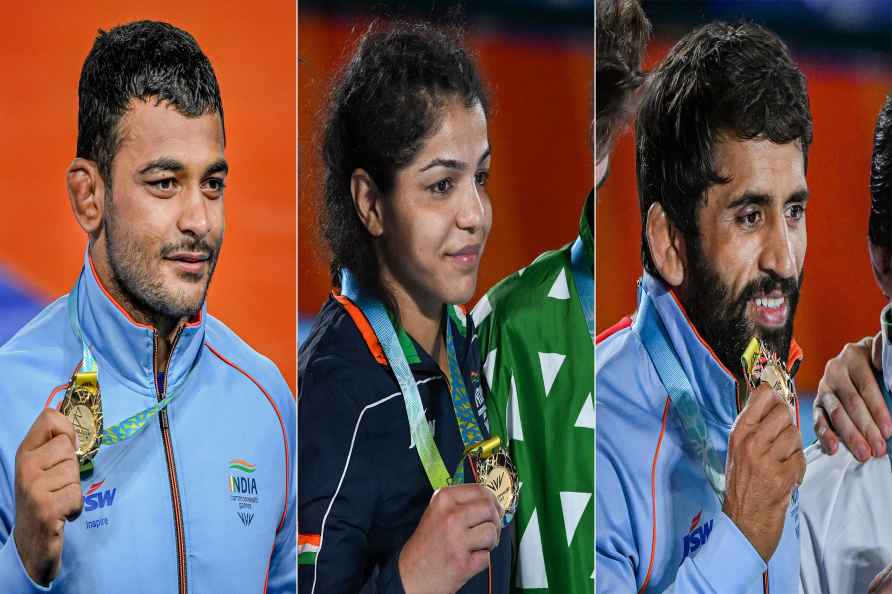 [**EDS: COMBO PHOTO** Birmingham: (L-R) Wrestlers Deepak Punia, Sakshi Malik and Bajrang Punia pose with their gold medals during the medal ceremony, at the Commonwealth Games 2022 (CWG), in Birmingham, UK, Friday, Aug. 5, 2022. ( /PTI] By B Shrikant Birmingham, Aug 6 : World Junior champion and World Championship silver medallist Deepak Punia bagged India's third gold in wrestling at the 2022 Commonwealth Games in Friday, outwitting Pakistan's Inam Malik in the final of the men's freestyle 86k. Deepak Punia won the bout 3-0 on points to claim his first gold medal in Commonwealth Games. It was a bout between wrestlers from arch-rivals India and Pakistan but it did not live up to that hype as Punia imposed himself on his opponent early and did not give him many chances. Scoring chances were few as the Pakistani wrestler was totally defensive and his movements too were a bit restricted. He had his left leg strapped at the knee and looked to keep it away from any attack. Deepak took lead in the first period itself as he brought down Malik just outside the bout zone. The Pakistani wrestler was also penalised a point for passivity, giving Punia a 2-0 lead at the end of first period. Punia did try to infuse some life into the bout in the end period as he tried a few tactics but the Pakistani wrestler kept his nerves and defended well. In the second period, Punia claimed another point as the bout ended. /IANS

Hardliner Himanta takes a leaf out of Yogi's political playbook
[Prayagraj: Relatives mourn by the body of Mohamed Usman, 15, who was killed by lightning on Friday at Prayagraj, in the northern Indian state of Utta

73 dead as migrant boat capsizes near Syrian shore
[Tripoli: Mourners carry the coffin of Palestinian Abdul-Al Omar Abdul-Al, 24, who was on a boat carrying migrants from Lebanon that sank in Syrian wa

EU 'must take seriously' Putin's nuclear threats
[Volgograd:A Russian officer checks the temperature of recruits as they lineup to be registered at a military recruitment center in Volgograd, Russia,

Light rain to occur over Delhi-NCR during next 2 hours: IMD

New Delhi, Sep 23 : The India Meteorological Department (IMD) on Friday said that the Delhi-NCR and adjoining area will receive light rain or drizzle during the next two hours till 3 p.m. "Light […]