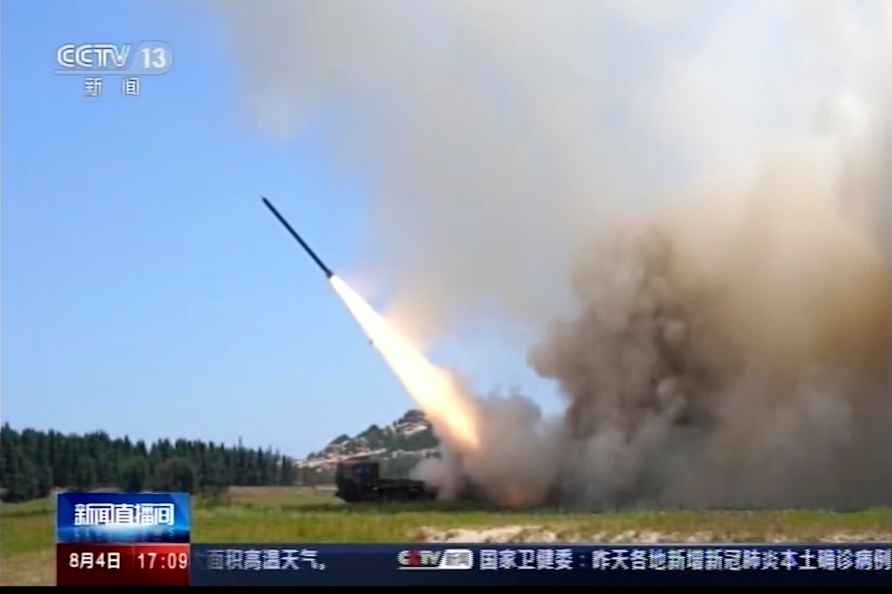 [In this image taken from video footage run by China's CCTV, a projectile is launched from an unspecified location in China, Thursday, Aug. 4, 2022. China says it conducted "precision missile strikes" in the Taiwan Strait on Thursday as part of military exercises that have raised tensions in the region to their highest level in decades. ( /PTI] Istanbul, Aug 4 : The first ship carrying Ukrainian grain for export since the Russian invasion of Kiev began in February has successfully passed an international inspection on Istanbul's Bosporus Strait, and is now continuing its journey to the Lebanese port of Tripoli. Representatives of Ukraine, Russia, Turkey and the UN inspected the ship for approximately an hour on Wednesday, checking the cargo and documents, dpa news agency quoted the Turkish Defence Ministry as saying. Escorted by three Turkish vessels, the ship passed through the Bosporus into the Marmara Sea, state news agency Anadolu said. It is later scheduled to sail through the Gallipoli strait to the Mediterranean. The ship, the Razoni, had left the Ukrainian port of Odessa on Monday carrying 26,000 tonnes of corn. More than 20 million tonnes of grain from last year's harvest is still awaiting export, according to the Ukrainian authorities. The food is urgently needed on the world market, especially in Asia, Africa and the Middle East,where the UN recently warned of the biggest famine in decades. Also on Wednesday, Ukrainian Agriculture Minister Mykola Solsky said his country raised its outlook for this year's harvest despite the continued war, forecasting it would harvest 65 to 67 million tonnes of grain and oilseeds, up from an initial estimate of 60 million tonnes. Under a deal agreed on July 22 to lift Russia's months-long blockade of the ports, Ukraine pledged to guide the ships through waters that have been mined and Russia promised to not target the ships and certain port infrastructure. The deal's brokers, the UN and Turkey, said they would help safely coordinate the exports and monitor the shipments to ensure the vessels were only being used to export grain. A joint coordination centre has been opened in Istanbul and is staffed by the four parties, prompting some observers to suggest that the deal could be a first step towards an eventual peace deal. However, Ukrainian President Volodymyr Zelensky took a less than conciliatory stance in his daily video address on Wednesday evening, when he sharply criticized the world's security architecture as wholly inadequate, pointing not only to the war in his own country, but also to conflicts in the Balkans, Taiwan and the Caucasus. "All these situations seem different, although they are united by one factor, namely: the global security architecture did not work," Zelensky said, before once again accusing Russia of violating international law in its unprovoked invasion of Ukraine. The war in Ukraine had demonstrated just how fragile freedom was, Zelensky said, adding that the world needed "an effective global security architecture that ensures that no state can ever again use terror against another state". He also accused Russia of only pretending to be open to peace negotiations, adding that if Moscow really wanted a peaceful solution to the conflict, it wouldn't currently be regrouping in southern Ukraine. On the ground in Ukraine, a Wednesday intelligence update published by Britain's Ministry of Defence (MoD) noted that Ukrainian counter-attacks in the south-eastern Kherson region were increasingly causing problems for occupying Russian forces, whose ground offensive against the Ukrainian military on Wednesday failed, according to the Ukrainian General Staff. The Ukrainian counter-offensive in the region has recently gained momentum, according to Western security circles, and Britain's MoD said it expected more and more civilians to flee the region in the near future if the fierce fighting continued. /IANS

Chennai: India A player Kuldeep Sen reacts during the 1st unofficial One Day International (ODI) cricket match between India A and New Zealand A, at MA Chidambaram Stadium in Chennai, Thursday, Sept. […]

Mumbai: Students participate in a flash mob as a tribute to the ...

Mumbai: Students participate in a flash mob as a tribute to the cultural diversity of India, at Churchgate Railway Station in Mumbai, Thursday, Sept. 22, 2022. ( /PTI […]