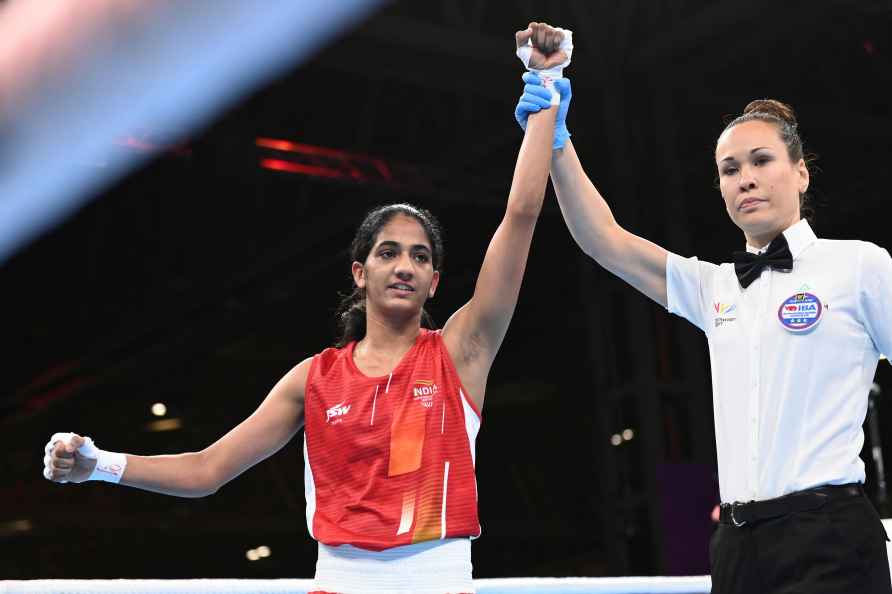 [India's Nitu Nitu, left, celebrates after winning the Women's Minimum Weight quarter final boxing bout against Northern Ireland's Nicole Clyde at the Commonwealth Games in Birmingham, England, Wednesday, Aug. 3, 2022. /PTI] By B Shrikant Birmingham, Aug 3 : Indian boxers Nitu and Hussamuddin Mohamad assured themselves at least a medal in the Commonwealth Games as they reached the semifinals in their respective weight divisions, overcoming their quarterfinal opponents in contrasting styles at the National Exhibition Centre, Hall No 4, here on Wednesday. Nitu reached the last-four stage of the women's minimum weight division (over 45-48kg) when her opponent Nicole Clyde of Northern Ireland abandoned the bout. The pull-out by the Northern Ireland boxer meant Nitu made it to the semifinals and ensured that she will leave Birmingham with at least a bronze medal as both semifinals get a medal in boxing. Hussamuddin advanced into the semifinals by defeating Namibia's Tryagain Morning Ndevelo 4-1 on points. The place in the semifinals assured him at least a medal in the men's 57kg division. While she reached the semifinals because her opponent abandoned the bout, Nitu said she prepared well for her quarterfinal bout and was looking forward to winning it, adding that she is aiming to win the gold medal in Birmingham. "I was prepared physically and mentally for this fight. The training camp over here in Northern Ireland before the Games helped me massively. "I am very happy to be making my family proud who have sacrificed a lot for me to be here. I am doing myself and them proud by advancing through to the semi-finals. I am aiming to get the gold here in Birmingham and don't want to settle for less," said Nitu after advancing to the last-four stage. India have three more competitors attempting to reach the semifinals on Wednesday. Reigning World Champion Nikhat Zareen, Tokyo Olympics bronze medallist Lovlina Borgohain and Ashish Kumar are scheduled to participate in their respective quarterfinal bouts later in the afternoon. India had a very successful outing in the 2018 Commonwealth Games four years ago winning nine medals -- three gold, three silver and three bronze each, finishing tied with England, who however topped the list as they had won six gold medals. India are hoping to emulate if not better their Gold Coast CWG haul of nine medals. /IANS

Nagpur, Sep 23 : The start of the second T20 International between India and Australia in the 2022 Series here on Friday has been delayed due to wet patches on the ground because of heavy rains in the […]

Gaurika Bishnoi gets a boost ahead of Women's Indian Open, moves up Order of Merit

Gurugram, Sep 23 : Gaurika Bishnoi ended a long title drought as she claimed the 13th Leg of the Hero Women's Pro Golf Tour at the DLF Golf & Country Club, Gurugram and moved up the Hero Order of Meri […]

[**EDS: STANDALONE FEATURE** Pulwama: A farmer carries harvested paddy in a field during harvest season, at Tral in Pulwama district of South Kashmir, Saturday, Sept. 24, 2022. The quality of the prod […]