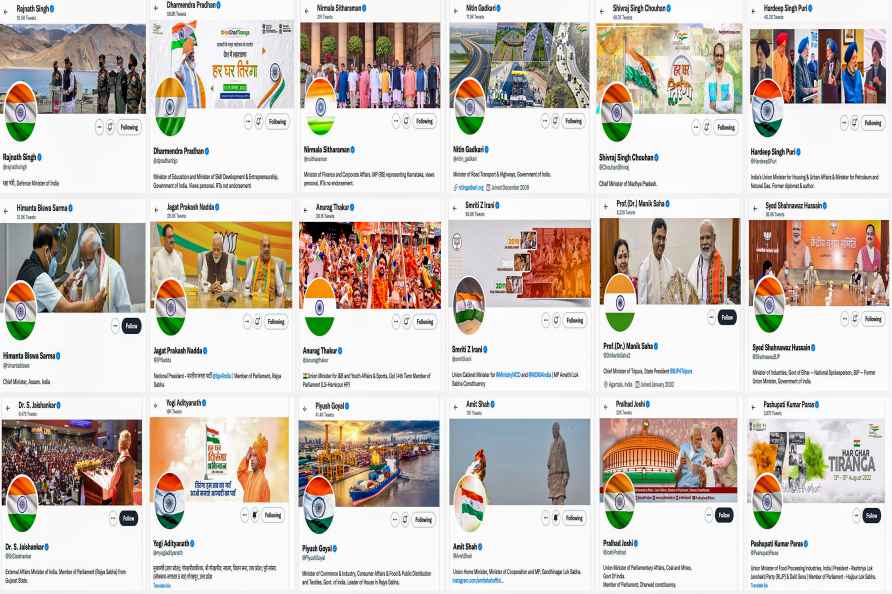 Bhopal, Aug 3 : Madhya Pradesh unit of the Bharatiya Janata Party (BJP) has geared up to commemorate the 'Azadi Ka Amrit Mahotsav' with the celebrations to mark 75th anniversary of the Independence Day began across the country on Tuesday. The state ruling saffron party has decided that all of its offices, from state party headquarters to district and block level offices, will have stock of Tri-colours, which will be distributed to the people under the Centre's 'Har Ghar Tiranga' initiative. The state government has fixed a target to hoist 1.51 crore 'Tiranga' (Tri-colours) across the state, one crore of them will be prepared in the state, while 51 lakh Tri-colours would be received from the Central government. To promote patriotism among the people, different departments of the state government have either have started organising 'Har Ghar Tiranga' programmes or have prepared for the same. The nationwide programme, that commenced on Tuesday will continue till August 15. While, the distribution of the Tri-colours will be done between August 13 to 15. As Prime Minister Narendra has urged the citizen of the country to change social media profile picture to the national flag, Madhya Pradesh cabinet ministers, including Chief Minister Shivraj Singh Chouhan changed pictures on their twitter handles. Like other departments in the state, Madhya Pradesh Police too have prepared itself to mark the occasion by organising a well decorated march. On Tuesday, Shajapur district police led by the Superintendent of Police (SP) Jagdeesh Davar, cops held a march on bikes. SP Jagdeesh Davar along with district collector Dinesh Jain lead the march from police Gypsy, cops in 75 bikes holding the Tri-colours drove in the city. Talking to IANS, Davar said, "This a special occasion that we are celebrating 75th anniversary of our Independence Day. The march organised to encourage the people to participate in this patriotic festival. We have urged people to hoist the Tri-colours on their homes from August 13 to 15." /IANS

Karnataka HC doesn't have expertise to interpret Quran, petitioners in hijab row to SC
New Delhi, Sep 12 : Petitioners in the hijab ban case on Monday told the Supreme Court that Karnataka High Court faulted by holding wearing of the hea

New Delhi, Sep 12 : The Supreme Court Collegium, headed by Chief Justice of India U.U. Lalit, has approved the appointment of 20 judges to high courts of Punjab and Haryana, Bombay, and Karnataka. […]

Amritsar, Sep 12 : The Spring Dale School in Amritsar has received a bomb threat on social media, following which the school authorities have lodged a complaint with the police. The threat came […]

Kolkata, Sep 12 : Indian Super League (ISL) winner Hyderabad FC put in a strong performance against I-League side Rajasthan United to claim a 3-1 win in the Durand Cup 2022 quarterfinals here at the K […]