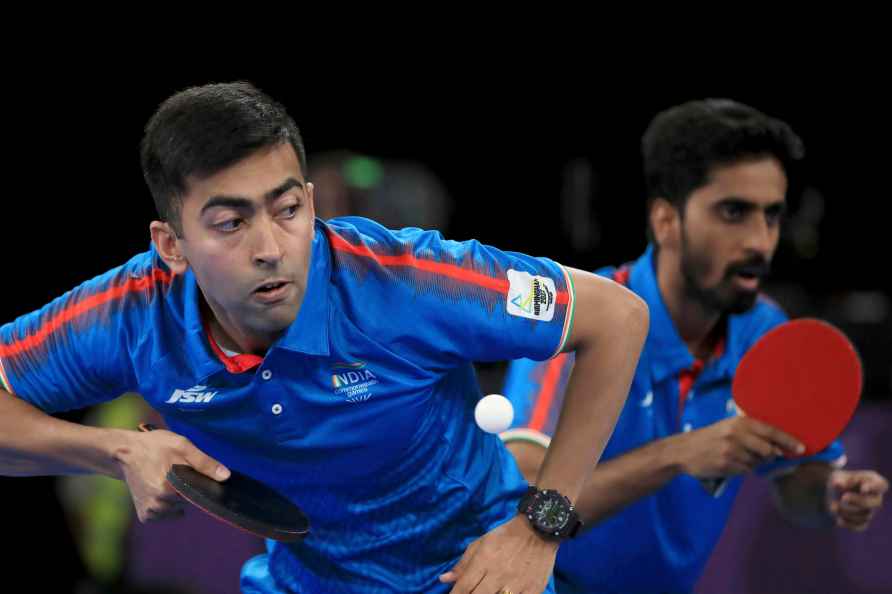 [India's Harmeet Desai and Sathiyan Gnanasekaran return to Singapore's Yong Izaac Quek and Yew En Koen Pang, during The Men's Gold Medal match, at The NEC on day five of the 2022 Commonwealth Games in Birmingham, Tuesday, Aug. 2, 2022. ( /PTI] Birmingham, Aug 2 : A clinical India beat Singapore 3-1 in the final of the Commonwealth Games 2022 men's team table tennis event to clinch the gold medal at the National Exhibition Centre, here on Tuesday. With this, India team defended their title as it had also won the gold in 2018 at Gold Coast CWG with 3-1 win over Nigeria in the final. India fielded the tried and tested line-up for the summit tie as its top-ranked singles player Sathiyan Gnanasekaran teamed up with Harmeet Desai in the opening doubles match to beat Singapore's Izaac Quek Yong and Pang Yew En Koen 3-0 (13-11, 11-7, 11-5). The Indian table tennis pair, who was also instrumental in India's gold medal win at Gold Coast 2018, raced to a 6-3 lead but were troubled by the Singaporean duo as the game progressed. The right and left combination of 16-year-old Izaac Quek Yong and Pang Yew En Koen, 20, regrouped by taking the next four points and the lead. However, Harmeet and Sathiyan mixed the flicks and top spins to mount a comeback. Despite giving away two game points, the Indians managed to hold on and won the crucial game. The Indian pair was more assertive from thereon and made sure the momentum did not slip and took the second and third games with ease. Thereafter, India's national champion Sharath Kamal, who beat Nigeria's world No. 15 Quadri Aruna in the semis, was flattened by Singapore's world No. 133 Zhe Yu Clarence Chew 3-1 (11-7, 12-14, 11-3, 11-9) in a big upset. Sharath, ranked 39th, was stunned by Clarence Chew's pace in the first game but used his forehand power and some luck on the net to win the next. The 26-year-old Clarence Chew completely dominated Sharath Kamal with a fine mix of diagonal and down-the-line shots. The 40-year old Indian, despite leading 4-1 in the fourth game, failed to win the long rallies and gave Singapore an opening. With India under pressure for the first time in the competition, Sathiyan responded with a 3-1 (10-12, 11-7, 7-11, 4-11) win over 20-year-old Pang Yew En Koen. After a slow start, Sathiyan improved his intensity to win the game of halves. However, the Singaporean, with better pitching, took the next game. Sathiyan started anticipating Pang Yew En Koen's top spins easily. The Indian went on the offensive and brought his team back into the lead. Harmeet Desai, playing his only second singles match at Birmingham 2022, faced an uphill task against free-flowing Zhe Yu Clarence Chew, who beat Sharath Kamal in the second match. The Indian, ranked 121st, was up for it and beat the energy-sapped Pang Yew En Koen 3-0 (11-8, 11-5, 11-6) with precise returns and helped India win back-to-back golds. Earlier in the competition, the Indian women's team, led by their top table tennis player Manika Batra, suffered a major upset against Malaysia after going down 3-2 in the quarter-finals. The men's singles and doubles table tennis events at Birmingham 2022 will begin on Wednesday. /IANS

'I would have shot in the head', Abhishek reacts to ruckus on Kolkata streets
[Kolkata: Trinamool Congress (TMC) MP Abhisekh Banerjee speaks with media after meeting a police officer who got injured during BJP's 'Nabanna Abhijan

Paris, Sep 14 : Air traffic in France will be severely disrupted this Friday due to a strike over wages, the French Civil Aviation Authority (DGAC) has warned. French air traffic controllers are takin […]

Islamabad, Sep 14 : Pakistani National Assembly Speaker, Raja Pervaiz Ashraf has said that global climate change is acting as a real threat to human security and effective measures should be taken to […]

IOM seeks over $50 mn to scale up assistance for 2.5 mn Somalis as famine looms

Mogadishu, Sep 14 : The UN migration agency, the International Organisation for Migration (IOM), has said it requires more than $50 million to reach 2.5 million people affected by the drought by the e […]

Los Angeles, Sep 14 : The US now joins a list of nearly 30 other countries with circulating vaccine-derived poliovirus (cVDPV) identified by the WHO, the US Centers for Disease Control and Prevention […]