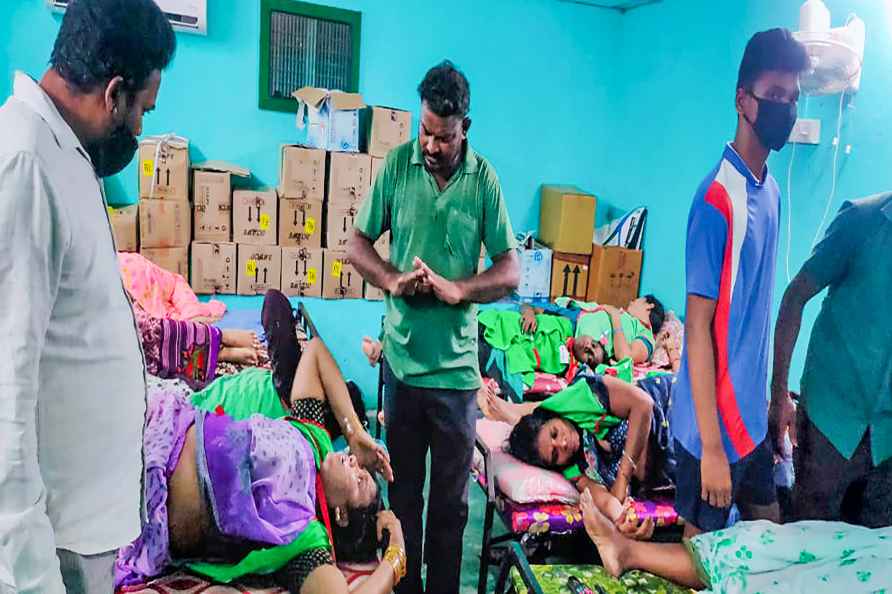 [Visakhapatnam: Women workers rest after they fell sick following a gas leak at an apparel manufacturing unit in the Brandix Special Economic Zone at Atchyutapuram, in Visakhapatnam district, Tuesday, Aug. 2, 2022. More than 50 women workers fell sick after inhaling the gas, according to officials. ( /PTI] Visakhapatnam, Aug 2 : About 100 women workers of an apparels firm fell ill after a gas leakage from an adjacent chemical company in Andhra Pradesh's Anakapalle district on Tuesday, officials said. The gas leak affected staff of Seeds Apparel India in the Special Economic Zone (SEZ) in Atchutapuram area. The women complained of vomiting, nausea, and breathlessness. Some of them fainted. About 50 women were shifted to hospitals in ambulances while others were being provided first aid within the factory premises. Seeds Apparel India, which employs only women is located on the 1,000 acres campus of Brandix, which is located next to Porus Labs, the chemical company. Industries Minister Gudivada Amarnath spoke to the district Collector over phone and directed officials to provide best possible treatment to the affected. This is the second incident of gas leak from the same company in two months. On July 3, more than 200 women employees were affected. Seeds Apparel and Porus Labs were shut down for a week. The government had ordered an inquiry after closing down the factory /IANS

We definitely want to win Lord's ODI for Jhulan Goswami: Harmanpreet Kaur
[Roma: A view of a center-right parties' rally in Rome Thursday, Sep. 22, 2022. Italians will vote on Sunday in what is billed as a crucial election