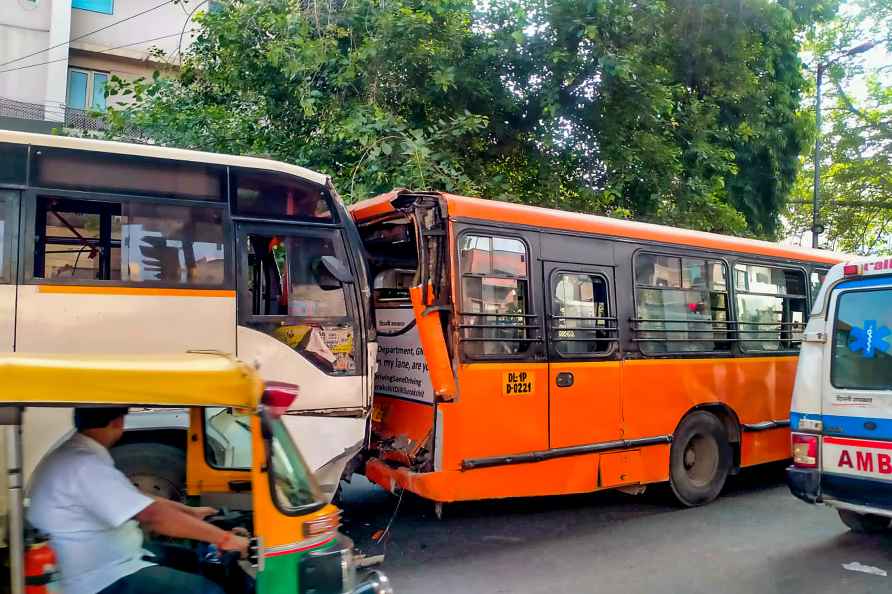 [New Delhi: Wreckage of two buses after a bus carrying labourers to the Central Vista project site collided with a cluster bus, at Patel Nagar in New Delhi, Tuesday, Aug. 2, 2022. At least 24 passengers were injured in the accident, according to officials. ( /PTI] New Delhi, Aug 2 : At least 28 people were injured when two buses collided here in the national capital on Tuesday morning, an official said. Deputy Commissioner of Police (central) Shweta Chauhan said an information regarding the accident of two buses at main Red Light Patel Nagar was received at Ranjeet Nagar police station at around 9 a.m. "On reaching the spot, one orange colour cluster bus was found hit by a white private bus from behind and the injured persons were already taken to hospital by ambulances," the DCP said. The injured people were taken to Sardar Vallabh Bhai Hospital, Patel Nagar where the police found that a total of 28 passengers including the driver of the private bus were being treated. "Out of these, three injured, who were from the cluster bus, left the hospital after first aid," the official said, adding that rest of the 25 injured people, including driver of the offending vehicle were referred to Ram Manohar Lohia Hospital for further treatment. The police said that the driver of the private bus, which caused the accident, is still unconscious. Legal action as per law is being taken, the official added. /IANS

Apple begins manufacturing iPhone 14 at Foxconn plant in India
New Delhi, Sep 26 : In a fillip to India's thrust on local manufacturing, Apple on Monday confirmed it has kicked off the production of new iPhone 14

New Delhi, Sep 26 : In a fillip to India's thrust on local manufacturing, Apple on Monday confirmed it has kicked off the production of new iPhone 14 in India, a first for the tech giant as it narrows […]

**EDS: HANDOUT PHOTO MADE AVAILABLE BY PIB ON MONDAY, SEPT. 26, 2022** Bikaner: Vice President Jagdeep Dhankhar inspects the Guard of Honour upon his arrival at Mukam, in Bikaner. ( /PTI […]

Fruit merchant with suspected IS links arrested in K'taka

Koppal (Karnataka), Sep 26 : A fruit merchant with suspected links with the Islamic State (IS) terror group was arrested in Karnataka's Koppal district, police said on Monday. The arrested perso […]

'Ponniyin Selvan: I' promotions in Delhi

Mumbai: Bollywood director Mani Ratnam with actors Aishwarya Rai Bachchan, Trisha, Sobhita Dhulipala and others during a press conference for their upcoming film 'Ponniyin Selvan: I', in New Delhi, Mo […]