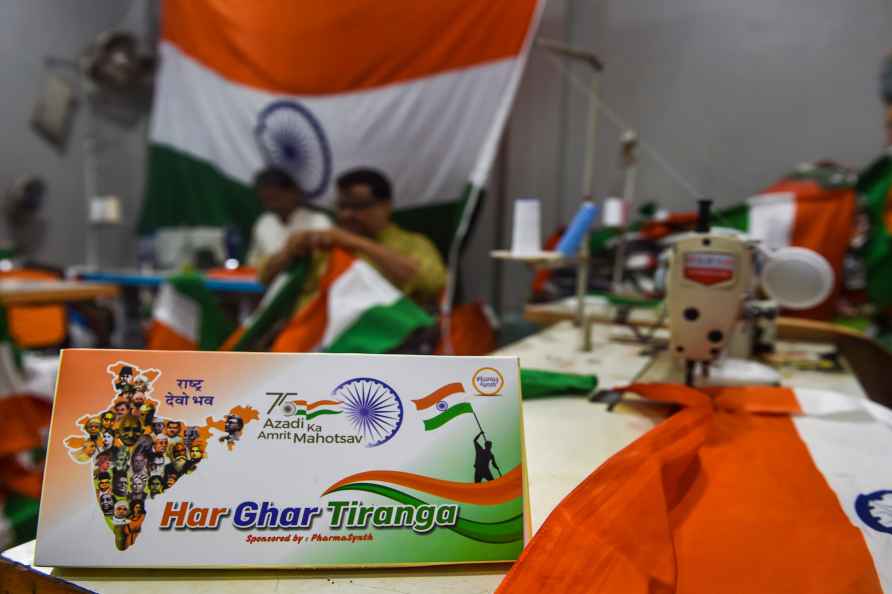 [New Delhi: Workers at the workshop of flag manufacturer Abdul Gaffar Ansari 'Jhande Wale' prepare Indian national flags, at Sadar Bazar in New Delhi, Tuesday, Aug. 2, 2022. Gaffar has received a large number of orders for Tricolours even as the government runs the ?Har Ghar Tiranga? campaign as part of ?Azadi ka Amrit Mahotsav? celebrations, which is encouraging people to hoist the national flag at their homes. ( /PTI] New Delhi, Aug 2 : Prime Minister Narendra Modi on Tuesday changed his profile picture and put 'Tricolour' on his social media pages; and also urged the people to put the flag on their accounts on social media platforms between August 2 to 15. In a tweet, the Prime Minister said, "It is a special 2nd August today! At a time when we are marking Azadi Ka Amrit Mahotsav, our nation is all set for #HarGharTiranga, a collective movement to celebrate our Tricolour. I have changed the DP on my social media pages and urge you all to do the same." In another tweet paying tribute to Pingali Venkayya on his birth anniversary, Prime Minister Modi said, "I pay homage to the great Pingali Venkayya on his birth anniversary. Our nation will forever be indebted to him for his efforts of giving us the Tricolour, which we are very proud of. Taking strength and inspiration from the Tricolour, may we keep working for national progress." In his monthly radio address 'Mann Ki Baat' on July 31, Prime Minister Modi had said, "Under the Azadi ka Amrit Mahotsav, from August 13 to 15, a special movement - 'Har Ghar Tiranga- Har Ghar Tiranga' is being organised. By becoming a part of this movement, from August 13 to 15, you must hoist the Tricolour at your home, or adorn your home with it." "I also have a suggestion that from August 2 to August 15, all of us can place the Tricolour in our social media profile pictures. August 2 has a special connection with our Tricolour. This day is the birth anniversary of Pingali Venkaiah ji who designed our national flag," he had added. /IANS

We will not put pressure on ourselves just thinking about T20 World Cup: Moeen Ali
[Karachi: A photograph of Queen Elizabeth II is displayed on the big screen as players of England team stand for their national anthem before the star

Thiruvananthapuram, Sep 20 : The tiff between Kerala Governor Arif Mohammed Khan and the ruling CPI-M led Left led by Chief Minister Pinarayi Vijayan appears to be escalating as on Tuesday the party o […]

Los Angeles, Sep 20 : Actress Kate Winslet has returned to work after being injured on a film set in Croatia. The 46-year-old actress was pictured getting back into character today after she was […]