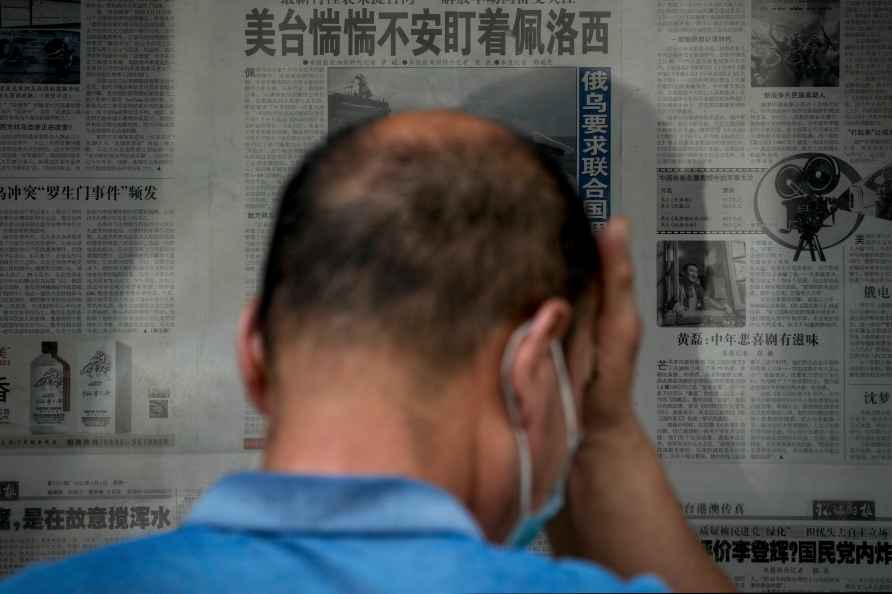 [A man rubs his forehead as he reads a newspaper headline reporting "U.S. Taiwan staring anxiously on U.S. House Speaker Nancy Pelosi" at a stand in Beijing, Tuesday, Aug. 2, 2022. Pelosi arrived in Malaysia on Tuesday for the second leg of an Asian tour that has been overshadowed by an expected stop in Taiwan, which would escalate tensions with Beijing that claims the self-ruled island as its own territory. ( /PTI] By Arul Louis United Nations, Aug 2 : Speaker of the US House of Representatives Speaker, Nancy Pelosi will defy China and visit Taiwan, while also disregarding the American government's advice creating a quandary for President Joe Biden's administration, according to media reports. National Security Council communications chief John Kirby warned on Monday that China was preparing for aggressive, retaliatory steps like firing missiles into the Taiwan Straits and intruding into Taiwan's air defence zone or holding intrusive air or naval exercises. But "we will not be intimidated", he declared at a White House briefing. "We will not take the bait or engage in sabre-rattling. At the same time, we will not be intimidated. We will keep operating in the seas and the skies of the Western Pacific as we have for decades." Simultaneously he tried to mollify Beijing, reiterating Washington's commitment to the "One China" policy, which, he said, had been communicated by Biden and several senior officials to their counterparts in recent days. Ratcheting the tensions with China while the Ukraine war rages is the last thing Biden wants, while he cannot also openly oppose Pelosi's independent move on Taiwan. While China has clearly made its opposition emphatic, Biden, who is making an overture to Beijing amid rising global tensions, has conveyed a Pentagon recommendation against Pelosi visiting Taiwan. "I think that the military thinks it's not a good idea right now," he said recently. China claims Taiwan is an integral part of it and Beijing's officials said it views high-level visits there as an interference in its internal affairs, while US officials cautioned that it should not use the visit to escalate the already tense situation in the region. Pelosi, who as Speaker is next in line of succession to the President after the Vice President, will be the highest-ranking US official to visit the island in 25 years when she goes there on Tuesday for an overnight visit, the reports quoting Congressional and Taiwanese officials said. On a day of rising rhetoric on Monday, Secretary of State Antony Blinken told reporters at the UN that if Pelosi visited Taiwan, the US expects China "to act responsibly, and not to engage in any escalation". If China tries to create a crisis or escalate tensions, that will "really be on Beijing", he added, while distancing the Biden administration from Pelosi's visit. "We do not know what Speaker Pelosi intends to do, but again, that is entirely her decision and one that we respect one way or the other." he said pointing out that "Congress is an independent, co-equal branch of government... the decision is entirely the Speaker's". Speaking later at the UN, China's Permanent Representative Zhang Jun, who took over as the Security Council President for this month, said that the Taiwan issue was a "red line" and the visit would be "dangerous and provocative". He said that China is fully prepared to "respond" and "will take firm and strong measures to safeguard its national sovereignty and territorial integrity, and the US has to bear all the aceserious consequences" of Pelosi's visit. During his phone call last week with Biden, China's President Xi Jinping delivered a stern warning that in regard to Taiwan "those who play with fire will eventually get burned". China's Foreign Ministry Spokesperson Zhao Lijian said on Monday: "The People's Liberation Army of China will never sit idly by, and we will make resolute response and take strong countermeasures to uphold China's sovereignty and territorial integrity." While he did not specify the action, a columnist at Chinese Community Party-linked newspaper Global Times had made the threat more direct in a now-deleted tweet asserting that Beijing has the right to "forcibly dispel Pelosi's plane". At his White House briefing, Kirby said that "potential steps from China could include military provocations such as firing missiles in the Taiwan Strait or around Taiwan; operations that break historical norms such as large-scale air entry into Taiwan's Air Defense Identification Zone", and "air or naval activities that cross the median line". China could also retaliate diplomatically and economically like claiming that the Taiwan Strait is not an international waterway as well as intensifying its disinformation campaign, he added. Kirby said that Pelosi's visit was not a change in US policy as members of Congress had visited Taiwan in the past and the trip should not be used as a pretext for a confrontation. But Zhang said that the circumstances were different now from the time of the visit of then-Speaker Newt Gingrich in 1997 because "Taiwan independence elements are moving on the wrong path". Pelosi arrived in Singapore on Monday on a tour of Asia for which the official itinerary includes Malaysia, South Korea and Japan, with no mention of Taiwan, although she had hinted in the past that she could make a stop. (Arul Louis can be contacted at aru.l@ians.in and followed at @arulouis) /IANS

Kolkata, Sep 26 : Bengali filmmaker, actor and politician Raj Chakraborty is all set to make his debut on the digital space with 'DM Mallika' for streaming portal hoichoi. Raj Chakraborty, who i […]

New Delhi, Sep 26 : Despite global macroeconomic conditions and rising inflation, salaries in India are likely to increase by 10.4 per cent on average in 2023, compared to an actual increase of 10.6 p […]

Liam's knock was special; took everyone by surprise: Matthew Mott