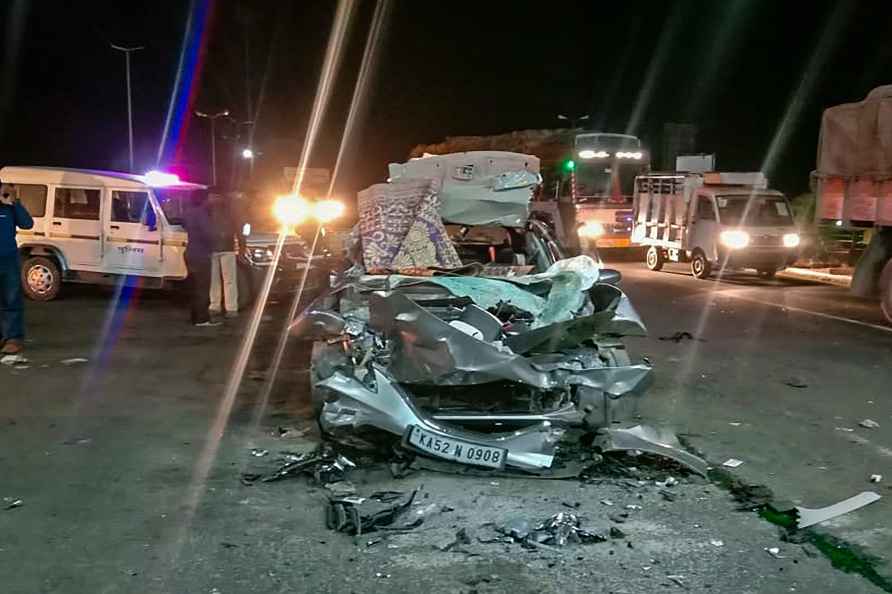 Patna, Aug 1 : Two youths were killed and four others were injured after a speeding car hit them on AIIMS-Digha elevated road here on Sunday night. The deceased were identified as Firdaus (22) and Faz (22), both residents of Khalilpur locality under Phulwari Sharif police station. The injured persons were identified as Azad alias Azam (22), Haidar (22), Ashutosh (23) and a girl whose name is not revealed yet. The errant car driver was also injured in this mishap. Amrendra Kumar, traffic in-charge of Rupaspur area said: "In a statement to the police, the injured persons revealed that they went for the night ride on AIIMS-Digha elevated road and then Ganga marine drive (Pathway). After visiting the marine drive, they returned and stopped at a section of the road. They parked the bike on the roadside and started walking on the street." "While walking for a few minutes, a speeding car hit them before crashing into the divider. The impact of the accident was such that two of them died on the spot while two others fell from the elevated road and were critically injured. Another two including the girl also sustained injuries," Kumar said. "As soon as, we learnt about the incident, immediately rescued the injured persons and admitted them in a trauma ward of AIIMS for treatments. Two of them are in critical conditions," he said. "The car driver was also injured in the accident and admitted at a private hospital," he said. /IANS

Telangana: 3 children drown in trench
Hyderabad, Sep 26 : Three children died after they fell and drowned in a trench filled with water in Telangana's Rangareddy district on Monday.

Three IIT Varanasi students among 7 killed in Himachal accident
[Kullu: An injured passenger undergoes treatment at a hospital, after a tempo traveller fell into a gorge on Sunday evening, in Himachal Pradesh's Kul

'Coffee With Kadhal' is a story around three brothers, says Sundar C

Chennai, Sep 26 : Ace director Sundar C, who is known for making rom-coms that work big time, said that his next upcoming romantic, feel-good, comedy entertainer, 'Coffee with Kadhal' is a story that […]

Moscow, Sep 26 : At least six people were killed and 20 others injured in a shooting at a school in the Russian city of Izhevsk on Monday, according to media reports. "Today, the police received […]