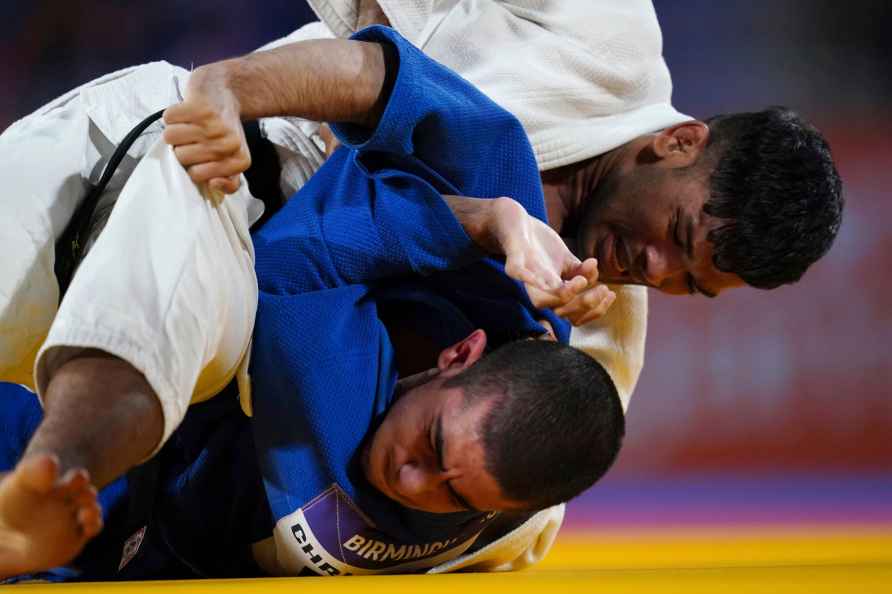 [India's Vijay Kumar Yadav, top, and Cyprus' Petros Christodoulides in action during the Men's 60kg Contest for Bronze 2 at Coventry Arena on day four of the 2022 Commonwealth Games, in Coventry, England, Monday Aug. 1, 2022. /PTI] Birmingham, Aug 1 : Judoka Shushila Devi Likmabam clinched India's seventh medal, and the first outside weightlifting at the Commonwealth Games 2022 in Birmingham after losing to Michaela Whitebooi of South Africa in the women's 48kg final in Judo. This is her second medal at the Commonwealth Games after she won silver at the Glasgow in 2014. Vijay Kumar bagged a waza-ari after just 5 seconds of the bell and held on to claim the Ippon to take home the bronze medal in the men's 60 Kg Judo event. Vijay Kumar made quick work of Cyprus' Petros Christodoulides in the opening minute of the bronze medal match to claim a medal for India. The final proved to be an end-to-end encounter between Sushila Devi and Michaela Whitebooi with both judokas not leaving an inch till the end of the match. Both of them failed to register a single point at the end of regulation time. /IANS

Kolkata, Sep 26 : Bengali filmmaker, actor and politician Raj Chakraborty is all set to make his debut on the digital space with 'DM Mallika' for streaming portal hoichoi. Raj Chakraborty, who i […]

New Delhi, Sep 26 : Despite global macroeconomic conditions and rising inflation, salaries in India are likely to increase by 10.4 per cent on average in 2023, compared to an actual increase of 10.6 p […]

Liam's knock was special; took everyone by surprise: Matthew Mott