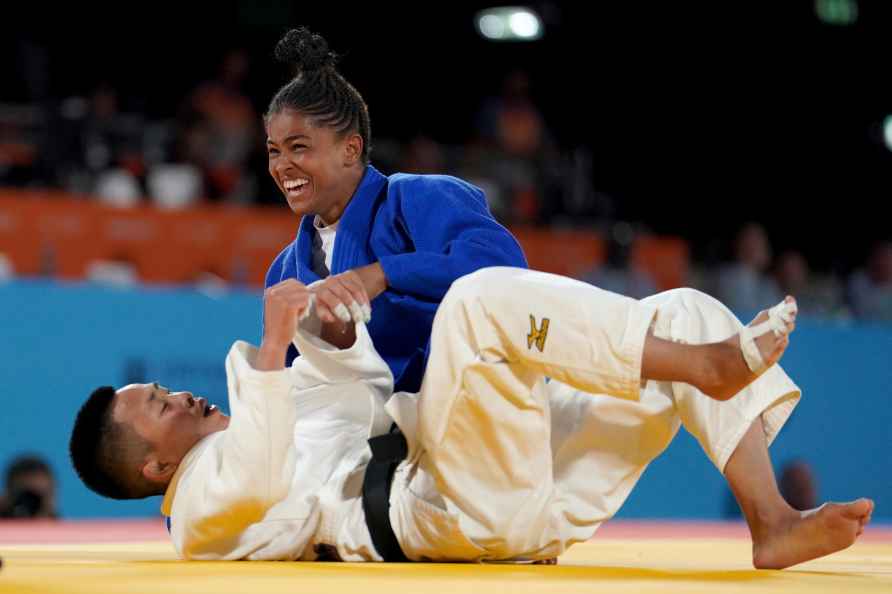 [South Africa's Michaela Whitebooi, top, celebrates after defeating India's Shushila Devi Likmabam to win a Gold Medal during the Women's 48kg Final at Coventry Arena on day four of the 2022 Commonwealth Games, in Coventry, England, Monday Aug. 1, 2022. /PTI] By B Shrikant Birmingham, Aug 1 : Indian judoka Sushila Devi Ikmabam scored an ippon in the last few seconds of her semifinal clash with Priscilla Morand of Mauritius in the Women's 48 kg division to assure India a medal in the Commonwealth Games judo competition. Indians are also in contention for three bronze medals in judo as Vijay Kumar Yadav in Men's 60kg, Jasleen Singh Saini in Men's 66kg and Suchika Tariyal in women's 57kg reached the bronze medal playoffs. India have bagged three silver and five bronze medals in the Commonwealth Games as judo has appeared on the programme on and off since 1990. It was contested in the 2014 edition in Glasgow but was dropped for the 2018 edition in Gold Coast. Sushila Devi, who participated in the Tokyo Olympics last year, now has the chance of claiming a maiden gold medal for the country when she takes on Michaela Whitebool of South Africa in the final later on Monday evening. Sushila, who won a silver medal in women's 48 kg in the 2014 Commonwealth Games in Glasgow, was in superb form as she matched the girl from Mauritius was handed a Shido, a minor penalty, in the first 30 seconds of their match. Sushila too got a couple of Shidos in the three-minute bout before she launched a fine attack and threw her opponent on her back with just a few seconds remaining to bag an Ippon, the highest score possible in a judo match, to seal the victory. Earlier in the morning, Sushila defeated Harriet Bonface of Malawi by an ippon to reach the semifinals. In Men's 60kg, Vijay Kumar started well and won his first-round match before losing to Australia's Joshua Katz in the quarterfinals. He went into the repechage rounds and defeated Dylan Munro of Scotland by a Waza-Ari to set up a bronze medal match against Petros Christodoulides of Cyprus in the evening. In Men's 66kg division, Jasleen Singh Saini lost to Scotland's Finlay Allan in the semifinals by an Ippon and will now figure in the bronze medal match against Nathan Katz of Australia. In the women's 57kg, Suchika Tariyal lost to Canada's Christa Deguchi of Canada in the quarterfinal 11-0 by an Ippon before coming through the repechage stage by defeating Donne Breytenbach of South Africa by an ippon to set up a bronze medal clash with Christianne Legentr of Mauritius in the bronze medal match. /IANS