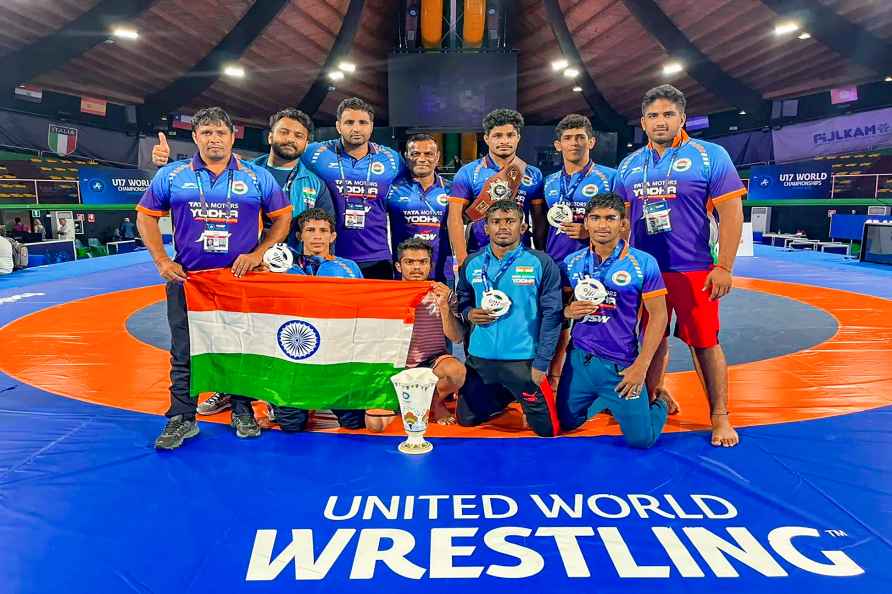 [**EDS: TWITTER IMAGE POSTED BY @Media_SAI ON MONDAY, AUG. 1, 2022** Rome: Indian players pose with their medals after the end of the U-17 World Wrestling Championships 2022, in Rome, Italy. Indian team with 14 medals; 7 gold, 1 silver and 6 bronze, finished on top of the medals tally while managing it's best ever medal haul at the U-17 World Championship. ( /PTI] By B Shrikant Birmingham, Aug 1 : The Indians could not have picked anyone better than skip Rupa Rani Tirkey to play the last bowl in the Women's Fours semifinal against New Zealand at the Commonwealth Games lawn bowl competition here on Monday. They were trailing 13-12 going into the 15th and final end and had to score at least two shots to claim a spot in the final and secure a historic maiden medal in the competition in which they had been coming close to winning medals since in 2018. Rupa Rani, 34, is one of the most experienced players in the Indian Fours line-up that also includes Lovely Choubey, Pinki and Nayanmoni Saikia, having represented the country in three Commonwealth Games in triples, pairs and fours so far. She has won three bronze medals in triples and fours in the Asia-Pacific Championships so far as part of the scene since 2009. On Monday, Rupa Rani nailed the final bowl and India bagged four points, securing a memorable victory against a higher-ranked team and assuring themselves of a maiden medal. "We are very, very happy. Cannot express it in mere words. We have fought as a team and now our journey doesn't end here. Tomorrow, we have to play in a similar fashion against South Africa and do what hasn't been done in the past 11 years," said Rupa Rani after she secured the final points for the team. Teammate Pinki said the fact that they had come close but failed to win a medal in the Commonwealth Games has been playing on their minds for a long time. "The fact that we haven't won in the Commonwealth Games gave us sleepless nights. In Gold Coast, our journey ended in the quarterfinals. This time around, we thought, we would have to turn things around. The one medal that was missing in India's cabinet, has been confirmed today. India is now set to win its first medal in CWG," she said after the match. Pinki said the team had to come through some tricky matches to reach the stage it has reached. She said initially, they never imagined that they would come so far. "Since we have come here, every match has been a do-or-die encounter. So we never thought we would reach the quarters or semis. We always thought of taking things one day at a time. It is only possible when all four of us think together," she said, adding that with the fortunes going up and down like a yo-yo, they tried to calm their nerves by getting into a huddle and talking to each other and praying for a break. For Nayanmoni, the highlight of Monday's performance was that the players did not lose faith even when they were trialing. "It might be difficult when you are trailing but we never lost faith. We kept going," she added. Lovely Choubey, the team's lead, thought that they will slowly get into the rhythm, by adding one point at a time and taking things forward from there. "We thought we will start creeping up on the opponent, climbing up by taking one, one point but we couldn't be too greedy at the same time," said Lovely. The tactics paid as the Indians shredded the lead one point at a time and slowly took the initiative before launching the ultimate attack in the final end to seal a thrilling victory and a historic medal. Now, that they have made the final, their target is to make it count and grab the gold medal. "This is supposed to be our first medal. So it has to be gold, isn't it? That will be the perfect start with much to follow. We have nothing to lose because we are going to win at least silver, that's for sure. So we would be aiming higher," said Lovely. And higher they will have to aim, not only for themselves but also for Indian lawn bowls as the sport is bound to make a big leap in popularity and support if the Women's Four at Birmingham manage to make more history and grab the gold medal. /IANS

'Coffee With Kadhal' is a story around three brothers, says Sundar C

Chennai, Sep 26 : Ace director Sundar C, who is known for making rom-coms that work big time, said that his next upcoming romantic, feel-good, comedy entertainer, 'Coffee with Kadhal' is a story that […]

Moscow, Sep 26 : At least six people were killed and 20 others injured in a shooting at a school in the Russian city of Izhevsk on Monday, according to media reports. "Today, the police received […]