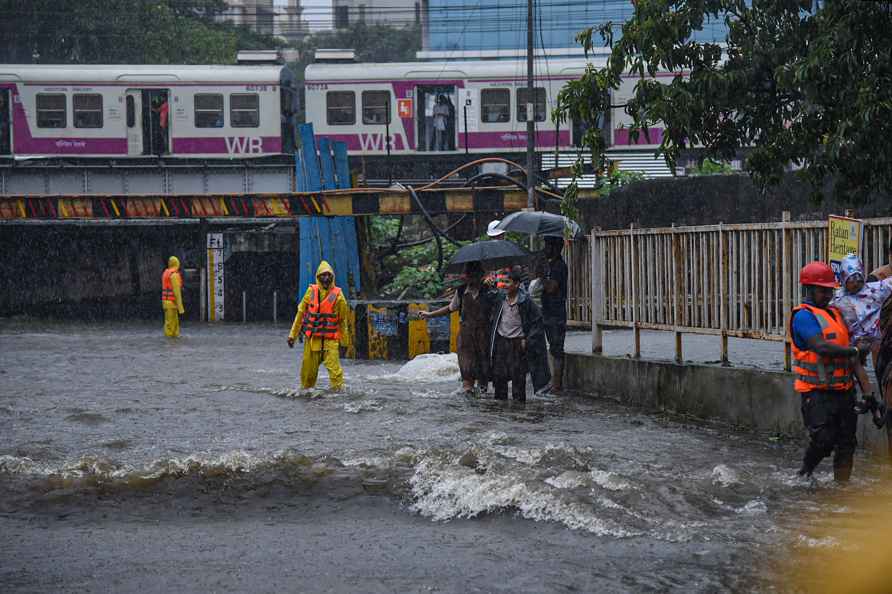 [Mumbai: People wade through a waterlogged street amid monsoon rains, near the closed Andheri Subway in Mumbai, Tuesday, July 5, 2022. India Meteorological Department (IMD) has predicted moderate to heavy rain in Mumbai and its suburbs over the next 24 hours. ( /PTI] Mumbai, July 5 : Heavy rains clobbered the country's commercial capital Mumbai, the coastal Konkan and other parts of the state since last night, inundating many towns, villages in different areas, hitting road and rail traffic, officials said here on Tuesday. Personally monitoring, Chief Minister Eknath Shinde has put all districts on high alert and directed them to make all arrangements including shifting of people living in vulnerable areas as the incessant rains continued. In Mumbai, the chronic floor-prone areas like Sion, Wadala, Kings Circle, Bhandup, Parel, Kurla and Nehru Nagar were flooded with knee-deep or waist-deep water, several subways were waterlogged hampering east-west traffic movement and traffic crawling at a snail's pace on the two highways. The Central Railway and Western Railway suburban trains as well as Mumbai Metro services were operating normally after overnight downpour. The BrihanMumbai Municipal Corporation (BMC) has deployed extra pumps to eject the flood waters in several areas. Other coastal districts of Palghar, Thane, Raigad, Ratnagiri and Sindhudurg were also lashed by heavy rains with big and small local rivers swelling above the danger levels. Many towns like Chiplun, Vaibhavwadi, Ambet, Khed, Poladpur and others were flooded with road traffic closed, and a minor hillslide reported in a couple of areas in the Western Ghats in Ratnagiri district. Villagers living in the vicinity of landslide or hillslide prone areas and on the banks of rivers or the Arabian Sea have been put on high alert with the major Vashishth and Jagbudi rivers flooded and flowing above the danger marks in some areas. The Kundalika river has also crossed the danger mark, while Amba, Savitri, Patalganga, Ulhas and Gadi rivers are flowing close to the danger levels. The IMD's Regional Meteorological Centre has forecast heavy rains in Mumbai and coastal Maharashtra for the next four days, with an Orange Alert sounded. The entire west coast from Gujarat, Maharashtra, Goa, Karnataka and Kerala is covered with dense clouds with the possibility of very heavy to heavy rains, and isolated extremely heavy rains for the coastal regions plus central and western Maharashtra, said IMD-Pune head K. S. Hosalikar. The state government is keeping an eagle eye on the monsoon situation unfolding in different areas and has kept teams of NDRF, SDRF and other disaster agencies on high alert to be deployed at short notice. Shinde has asked for specific monitoring in Palghar, Thane, Raigad, Ratnagiri, Sindhudurg and Kolhapur districts to keep all agencies in top preparedness for any eventuality. Deputy Chief Minister Devendra Fadnavis said the government has reviewed the rainfall situation in the state and the administration has been put on a high alert. /IANS

Days of fear, corruption and militancy are over: J&K L-G
[Srinagar: Jammu and Kashmir Lt Governor Manoj Sinha inspects the parade after unfurling the national flag during 76th Independence Day celebrations a

One thing that stands out is how Rohit Sharma backs players who aren't performing: Parthiv Patel

New Delhi, Aug 14 : Former India wicketkeeper-batter Parthiv Patel pointed out that captain Rohit Sharma backing his players to the hilt even when they are not performing has been a standout for him. […]

This drug can fight more than 300 drug-resistant bacteria

New York, Aug 14 : A team of researchers have developed a novel drug molecule that can help ward off more than 300 drug-resistant bacteria. Reported in ACS Central Science journal, the drug comp […]

New Delhi: Elephant statues installed at the Lahori Gate of the Red Fort as part of decorations for the 76th Independence Day function, in New Delhi, Monday, Aug 15, 2022. ( /PTI […]