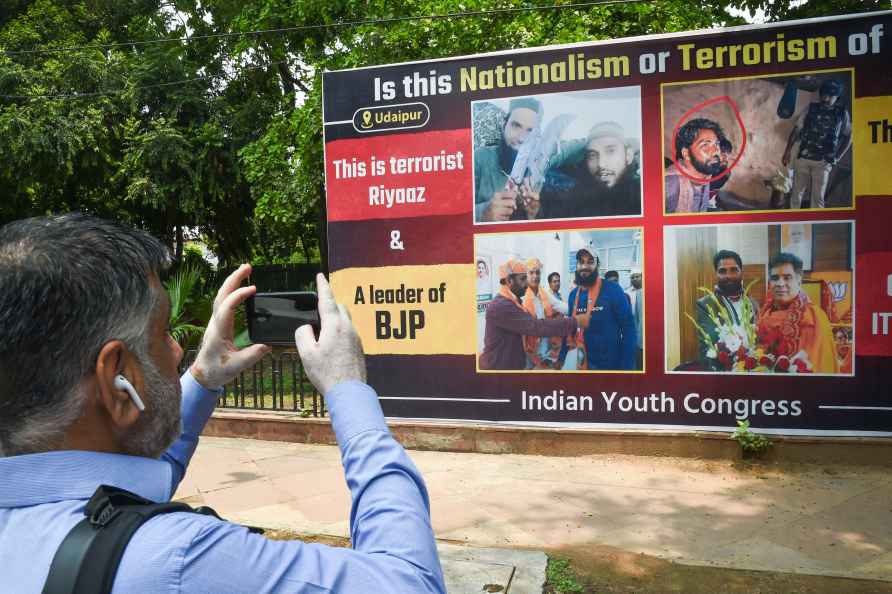 [New Delhi: A man clicks picture of a hoarding, put up near the Indian Youth Congress office, alleging BJP's connection to Udaipur case accused and arrested Lashkar-e-Taiba (LeT) commander Talib Hussain Shah, in New Delhi, Tuesday, July 5, 2022. ( /PTI] New Delhi, July 5 : The Congress on Tuesday came down heavily on the BJP over its alleged links with apprehended LeT terrorists in Jammu and Kashmir and killers of Kanhaiya Lal whose pictures with BJP leaders. Addressing a press conference here, Congress Communication In charge, Pawan Khera sought answers from the BJP. He said: "Two incidents in the past week have exposed the two-faced BJP. First, we learned that one of the accused in Kanhaiya Lal's horrific murder in Udaipur was a BJP worker. Then it emerged that a captured Lashkar-e-Taiba terrorist in Jammu and Kashmir was not only a BJP office-bearer who had previously been captured in photos with Home Minister Amit Shah but was also planning to attack the Amarnath Yatra." It is "shocking" that the BJP, a party that loses no opportunity to preach about nationalism, has members and office-bearers who are deeply implicated in violent anti-national activities, he added. He alleged that there is long list of BJP functionaries who have been caught participating at the behest of Pakistani agencies in terrorism and espionage. Former BJP leader and ex-sarpanch Tariq Ahmad Mir was arrested two years ago for procuring weapons for Hizbul Mujahideen commander Naveed Babu, he alleged. In 2017, the Madhya Pradesh Anti-Terrorism Squad (ATS) arrested the BJP IT Cell member Dhruv Saxena along with ten accomplices for spying for the Inter Services Intelligence (ISI) Directorate, Balram Singh, a Bajrang Dal leader from Madhya Pradesh, was arrested in a terror funding case. He added that in 2017, a special court of the NIA sentenced Assam BJP leader Niranjan Hojai to life imprisonment for participating in a Rs 1,000 crore scam to divert government funds to support a militant group. The BJP has also knowingly given a ticket to Masood Azhar's acolyte Mohammad Farooq Khan to contest the Srinagar municipal election from Ward 33. Khan was previously a member of the Jammu and Kashmir Liberation Front and the Harkatul Mujahideen. Khera said they appeal to the people to India to see through the BJP's fake nationalism and its disturbing willingness to flirt with anti-national forces. "What kind of an ideology finds place for both Nupur Sharma and Riyaz Attari? And accommodates radicals like Talib Hussain? Is the BJP inspired by the alliance between the Hindu Mahasabha and the Muslim League in which extremists of all religions banded together to prevent nationalist forces like the Congress to come to power?" he added Denying any such links, the BJP accused the Congress of playing politics on the recent incidents. /IANS