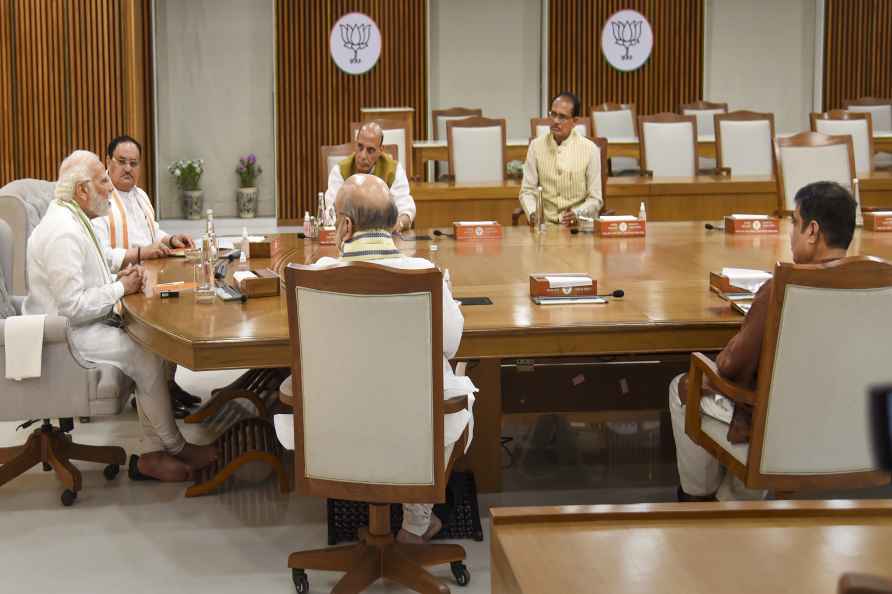 Hyderabad, July 1 : The BJP has painted Hyderabad saffron as the city is all set to host the party's national executive meeting beginning Saturday. The saffron party has put up flags, banners, hoardings, flexis and huge cut-outs of its leaders across the city. Major traffic intersections have been decked up by the party supporters on the eve of the two-day meeting. Huge cut-outs of Prime Minister Narendra Modi along with BJP President J.P. Nadda, Home Minister Amit Shah, Telangana BJP President Bandi Sanjay and Union Minister for Tourism and Culture G. Kishan Reddy have been put up at several places in the city. Hoardings to welcome the national leaders of the party and other delegates were erected on roads leading to the Hyderabad International Convention Centre (HICC), the venue of the national executive. Several cutouts and flexis have come up around Parade Ground, where Prime Minister Modi and other national leaders of the BJP will be addressing a public meeting on Sunday at the end of the two-day national executive. As many as 350 delegates, including several Union ministers and Chief Ministers of BJP-ruled states, will be attending the national executive. Tight security arrangements have been put in place for both the national executive and public meeting. Cyberabad police have imposed prohibitory orders and banned flying of drones in the 5 km radius around the HICC. The national executive will review the implementation of the decisions taken at the previous executive meeting and chalk out future course of action to strengthen the party. The meeting is likely to focus on the roadmap for Assembly elections scheduled in some states later this year and next year and also for the 2024 Lok Sabha elections. The national executive is likely to pass resolutions on various issues, including a political resolution on the achievements of the Modi government during the last eight years. Another resolution is likely to be on Telangana, the state the party is currently focusing on. The draft resolutions are likely to be prepared at the party meeting Nadda would be holding with the BJP general secretaries on Friday night. BJP general secretary Tarun Chug told reporters that Prime Minister Modi will attend all the deliberations at the national executive along with 340 delegates. He said lakhs of people from across Telangana will attend the public meeting titled 'Vijay Sankalp' on Sunday. Also, party incharges from 35,000 polling booths will take oath to bring BJP to power in the state. BJP's national executive meeting is being held in Hyderabad after a gap of 18 years. The last time the saffron party had held the meeting here was in 2004, which was attended by then Prime Minister Atal Bihari Vajpayee, Deputy Prime Minister L. K. Advani and then party President M. Venkaiah Naidu, among others. /IANS