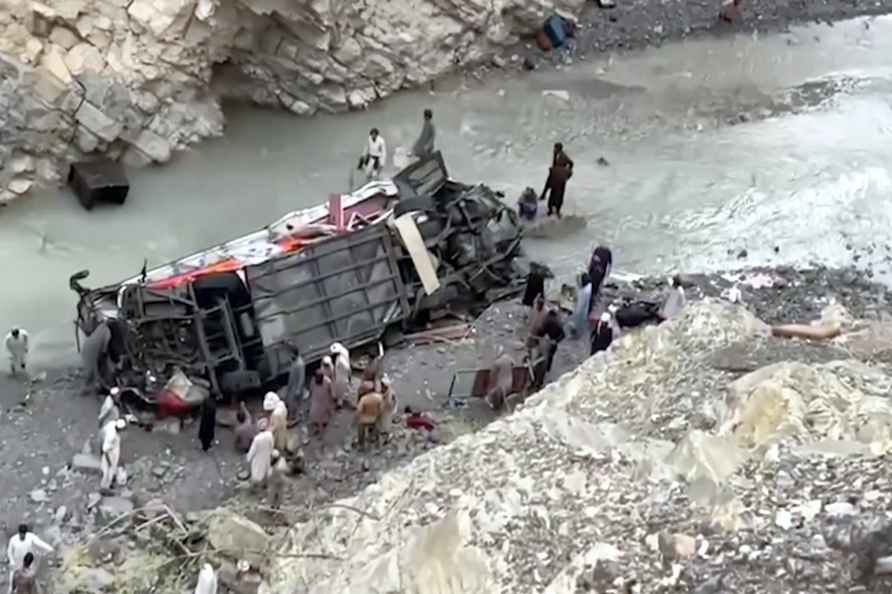 [Dana Sar:This frame grab from video shows rescue workers searching for survivors at the wreckage of a passenger bus that slid off mountain road and fell into a deep ravine in Dana Sar, Khyber Pakhtunkhwa province, in southwest Pakistan, Sunday, July 3, 2022. An official said the passenger bus slid off a mountain road and fell 200 feet (61 meters)  into a ravine in heavy rain killing at least 18 people and injuring some 12 others. /PTI] Islamabad, July 3 : At least 19 passengers were killed and 12 others injured when a passenger bus fell into a ravine on Sunday near Sherani district of Pakistan's southwestern Balochistan province, local media reported. The incident took place near Dana Sar area of the district along the border with northwestern Khyber Pakhtunkhwa province after the driver lost control due to over-speeding amid rain, Xinhua news agency reported, citing local media reports. The bus fell deep and overturned multiple times in the process, local media said. The victims were shifted to local hospitals, police told local media, adding that more deaths were possible as some of the injured were in critical condition. Over 30 passengers were on the bus which was heading to Balochistan's provincial capital Quetta from the country's capital Islamabad. /IANS

Since 1917, Jharkhand's Tana Bhagats have been worshipping the Tricolour daily
[Ranchi: Jharkhand Police personnel participate in a 'Tiranga Yatra' organised as a part of 'Azadi Ka Amrit Mahotsav' celebrations, on the eve of Inde

Gurugram: Union Minister for Environment Bhupender Yadav along with his wife Babita Yadav hoists the national flag at his residence as part of the 'Har Ghar Tiranga' campaign, in Gurugram, Sunday, Aug […]