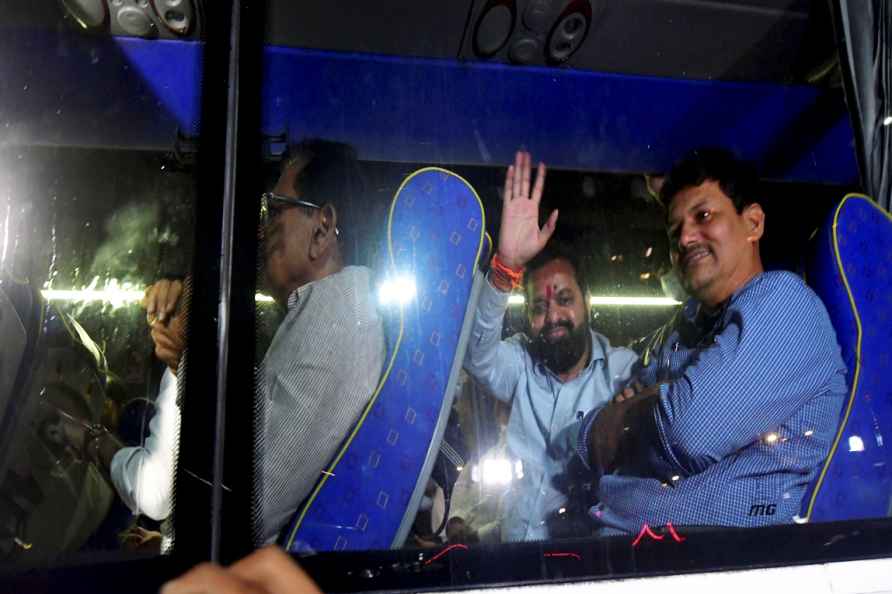 [Mumbai: Rebel Shiv Sena MLAs arrive at a hotel for a meeting with BJP MLAs, in Mumbai, Saturday, July 2, 2022. ( /PTI] By Quaid Najmi Mumbai, July 2 : After remaining 12 days on the move, jet-setting to 3 states and successfully toppling Maharashtra's Maha Vikas Aghadi (MVA) from long distance, the rebel group of Shiv Sena and independent/smaller parties' MLAs finally returned to their home state late on Saturday. Chief Minister Eknath Shinde, who had gone to Goa to fetch them, travelled with them in a special flight, a convoy of deluxe buses, flanked by security vehicles, zooming through a 'green corridor' to the Hotel Taj President in Cuffe Parade. The MLAs will put up at the hotel before travelling 3-kms to Vidhan Bhavan in Nariman Point to attend the 2-day special session of Maharashtra Assembly on Sunday-Monday to elect a new Speaker and a "vote of confidence". Traffic was halted on almost the entire 27-km route from Chhatrapati Shivaji Maharaj International Airport to Cuffe Parade, with tight security on both sides as a precaution. A battery of top Bharatiya Janata Party functionaries led by its state President Chandrakant Patil accorded them a conquerors' welcome at the hotel late this evening. On the night of June 20, the rebels had quietly gone incommunicado and by June 21 morning, all political hell broke loose as the 'rebellion" came to the fore, shaking the 30-month-old MVA regime headed by Chief Minister Uddhav Thackeray. Initially, the rebels spent a night in Gujarat's Surat, then flew down to Guwahati for around a week, and then to Goa for the past 3 days, always remaining out of "reach" of the desperate Shiv Sena leaders in Mumbai hoping to win - and wean - them back. Probably sensing the writing on the wall, after a fervent appeal to the deserters, Thackeray vacated his official residence 'Varsha' on June 22, and shifted to his private home 'Matoshri'. As the political crisis became deeper, Thackeray resigned as the CM and also quit his MLC seat on the night of June 29 - after an emotional social media address to the state. The next day, June 30, the BJP sprang a massive surprise by supporting the rebel group leader Eknath Shinde for the top post, and hours later the BJP central leadership dropped a bolt by insisting former CM Devendra Fadnavis join the new government as Deputy Chief Minister. The same evening, Shinde and Fadnavis took oath as Chief Minister and Deputy CM, finally drawing the curtain on the unprecedented political upheaval that rocked the state for 10 days. Shortly after their arrival at the hotel, the BJP and Shinde group MLAs', besides independents and smaller parties, numbering around 170, got into their first face-to-face joint meeting to finalise their political strategies for the next couple of days. Following the Speaker's election on Sunday - with a contest between BJP's Rahul Narwekar and MVA's Sena MLA Rajan Salvi - and the confidence vote scheduled on Monday, the two-man Shinde-Fadnavis cabinet expansion process is likely to be set rolling. (Quaid Najmi can be contacted at q.najmi@ians.in) /IANS

Days of fear, corruption and militancy are over: J&K L-G
[Srinagar: Jammu and Kashmir Lt Governor Manoj Sinha inspects the parade after unfurling the national flag during 76th Independence Day celebrations a

Thiruvananthapuram, Aug 14 : Kerala Police have arrested a minor boy from Karuvassery in Kozhikode district of Kerala, who was engaged in theft of bikes and other two-wheelers from in and around Kozhi […]