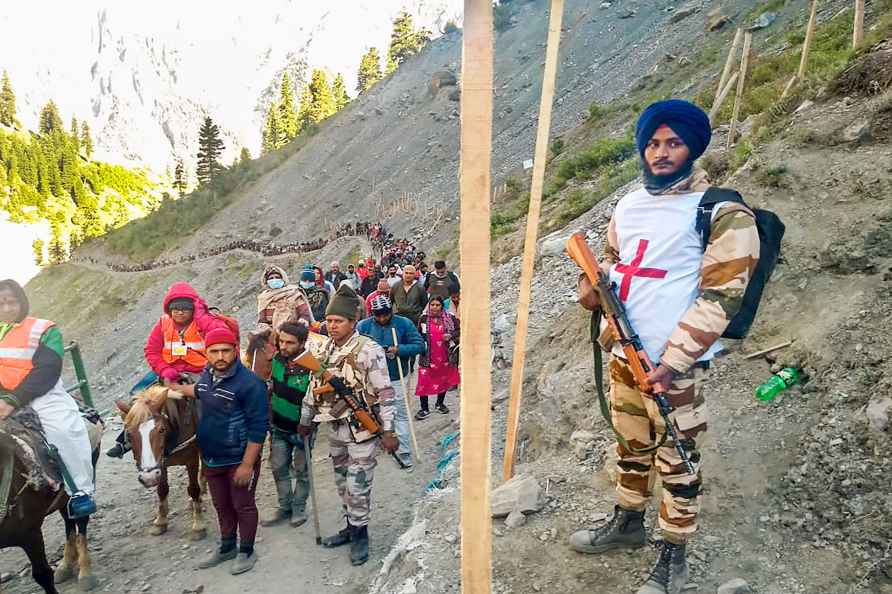 Jammu, July 1 : Another batch of 6,440 pilgrims left the Bhagwati Nagar base camp in Jammu city on Friday to perform the Amarnath Yatra. "The 6,440 yatris -- 2,309 bound for Baltal base camp and 4,131 for Pahalgam base camp -- left in two escorted conveys at 3.50 a.m. and 4.10 a.m. today, respectively from the Bhagwati Nagar base camp," officials said. Friday's pilgrims include men, women, children, sadhus and sadhvis. "A total of 264 vehicles are carrying the yatris, 111 towards Baltal and 153 towards Pahalgam," the officials added. This year's Amarnath Yatra started on Thursday and will end on August 11 on Shravan Purnima coinciding with the Raksha Bandhan festival. Those using the Baltal route have to trek 24 km to reach the cave shrine situated 3,888 metres above the sea level. Those using the traditions Pahalgam route have to trek 48 km spread on four days. The cave shrine houses an ice stalagmite structure that wanes and waxes with the phases of the moon. Devotees believe that the structure symbolises the mythical powers of Lord Shiva and they call it the holy Lingam. Helicopter services are also available for yatris on both the routes. /IANS

Statewide protest in Gujarat against 18% GST on 'garba'
[Surat: Aam Aadmi Party (AAP) workers stage a protest against the state government over imposing of GST on commercial garba's entry passes, in Surat,

Advait Page of India stretches before starting in the Men's 1500 meters freestyle final during the swimming competition of the Commonwealth Games, at the Sandwell Aquatics Centre in Birmingham, Englan […]

Birmingham: India's Tulika Maan in action during her finals match against Sarah Adlington of Scotland in the women's 78 kg category Judo event at the Commonwealth Games 2022 (CWG), in Birmingham, UK, […]

Birmingham: India's Tulika Maan during her finals match against Sarah Adlington of Scotland in the women's 78 kg category Judo event at the Commonwealth Games 2022 (CWG), in Birmingham, UK, Wednesday, […]