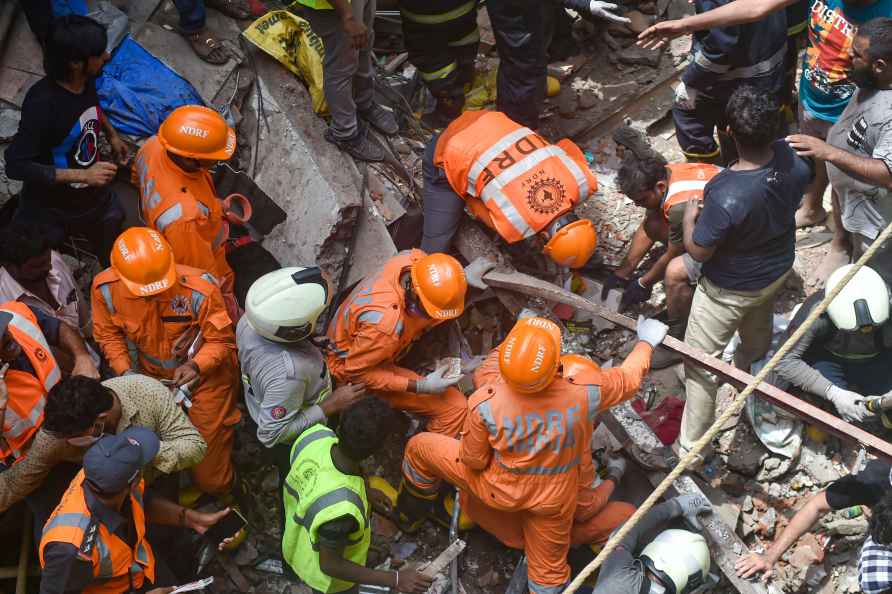 Mumbai, June 28 : The toll in the Mumbai building crash shot up to four and at least 17 others were injured here, the BMC Disaster Control said here on Tuesday. According to the officials, the entire wing of the ground-plus-three floor Naik Nagar building in Kurla east suburb of north-east Mumbai crashed minutes before midnight, trapping many persons living there. Earlier this morning, the body of an unidentified male, 30 was recovered from the debris and another 11 injured (all adult males), were rescued safely, rushed to Rajawadi Hospital in Ghatkopar and LTMG Hospital in Sion. As work got underway amid intermittent showers to clear the rubble, three more victims were recovered and another six injured survivors who have been rushed to hospital. The rescue teams of Mumbai Fire Brigade and other agencies besides local volunteers, who joined the rescue efforts there, have expressed a potential risk to the adjoining second wing of the same building which could also collapse anytime. /IANS

17 killed in road accident in Egypt
Cairo, Aug 3 : At least 17 people were killed and four others injured in an accident involving a micro bus and a truck on the desert road of Sohag Pro

Los Angeles, Aug 4 : One person was killed and three others were injured in a shooting in Los Angeles, police said. Patrol officers responded to a radio call for a traffic collision at about 2.2 […]

New York, Aug 4 : As the war in Ukraine continues to rage, skyrocketing energy prices are compounding an existential cost-of-living crisis for hundreds of millions of people, warned the UN Secretary-G […]

Washington, Aug 4 : US President Joe Biden is "still experiencing an occasional cough" after he tested positive for Covid-19 in a rebound case, his physician has said. The symptom is less freque […]