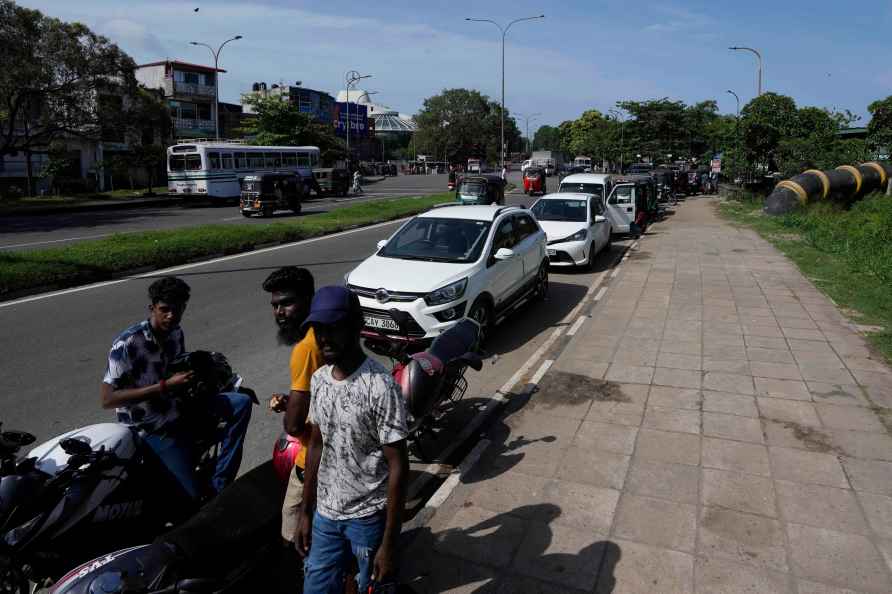 [Motorists wait in a queue expecting to buy fuel in Colombo, Sri Lanka, Sunday, June 26, 2022. Sri Lankans have endured months of shortages of food, fuel and other necessities due to the country's dwindling foreign exchange reserves and mounting debt, worsened by the pandemic and other longer term troubles. /PTI] Cololmbo, June 26 : Amid the ongoing economic crisis in Sri Lanka, Minister of Power and Energy Kanchana Wijesekera said the island nation will not receive shipments of petrol, diesel and crude oil, scheduled for this week and next week. The Minister said that suppliers have informed state-owned fuel importer and distributor Ceylon Petroleum Corporation (CPC) that they will not make the scheduled deliveries due to banking and logistic reasons, reports Xinhua news agency. Wijesekera said public transportation, power generation and industries would be given priority until the next shipments arrive. Therefore, limited stocks of diesel and petrol will be distributed to a few fuel stations throughout next week. The Minister urged the general public not to queue up for fuel. He also said that refinery operations will also be halted until the next crude shipment arrives. "We are working with all new and existing suppliers. I apologize for the delay and inconvenience," Wijesekera added. Sri Lanka has suffered crippling fuel shortages since February as a foreign exchange crisis worsened in the South Asian country leading to the worst ever economic crisis. Earlier this month, the CPC said that it only had 5,000 metric tonnes of petrol and thus only 500 metric tonnes will be released to fuel stations each day. The country currently needs at least $5 billion over the next six months to pay for basic essential items such as food, fuel and fertiliser. /IANS

CWG 2022: Nothing but gold will do well for Indian women's fours team after reaching historic final in lawn bowls
[**EDS: TWITTER IMAGE POSTED BY @Media_SAI ON MONDAY, AUG. 1, 2022** Rome: Indian players pose with their medals after the end of the U-17 World Wrest

CWG 2022: Ajay Singh misses out on medal by one kg, finishes at fourth place in men's 81kg final
[India's Ajay Singh makes a lift during the Men's 81kg Weightlifting Competition at The NEC on day four of the 2022 Commonwealth Games in Birmingham,